African savannas are full of predators like the lions, cheetahs and hyenas, and the herbivores here have to be extra cautious when it comes to survival. The zebra adaptations for survival discussed in this write-up will help you get a better picture of survival adaptations in African savannas. 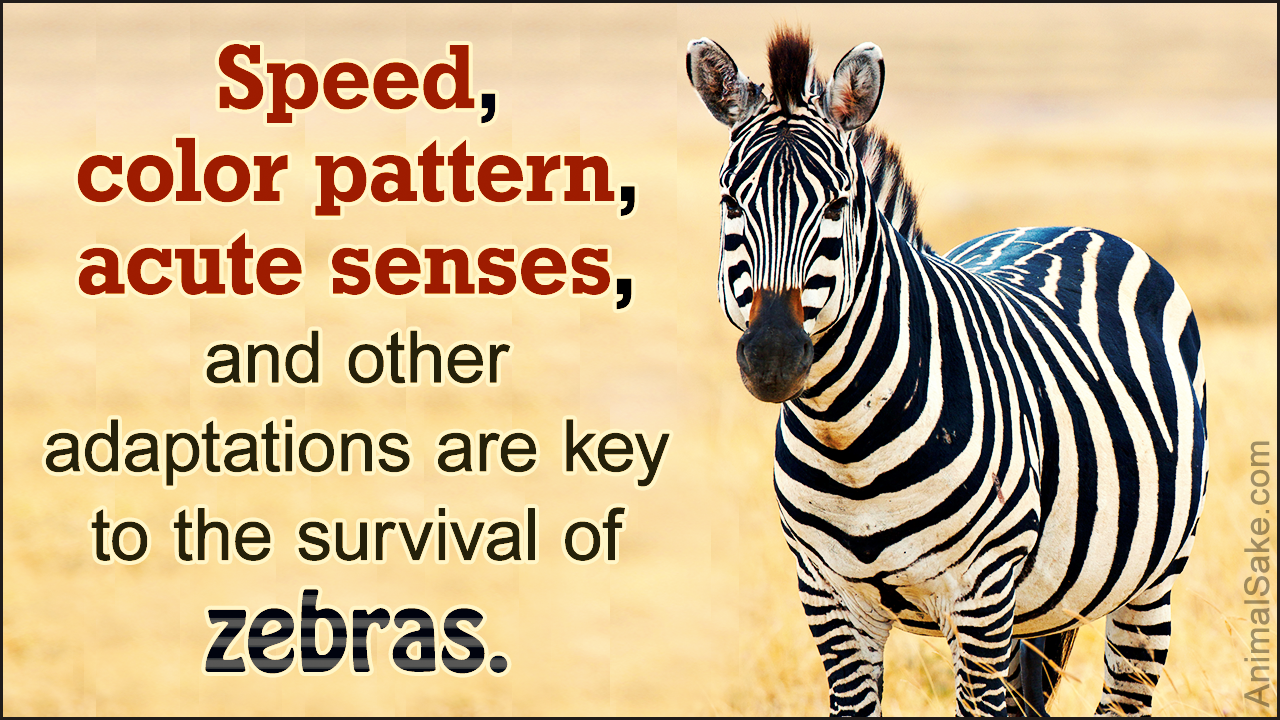 African savannas are full of predators like the lions, cheetahs and hyenas, and the herbivores here have to be extra cautious when it comes to survival. The zebra adaptations for survival discussed in this write-up will help you get a better picture of survival adaptations in African savannas.

The first thing to cross your mind when you think about the continent of Africa is more or less likely to be a herd of zebras grazing in the vast savanna grasslands. Zebras, with their typically black and white stripes which form distinct patterns unique to every individual, have been associated with the African savannas for quite some time now. While these black and white stripes of zebra happen to be its characteristic feature, very few people know that they are physical adaptations of this species which help them survive the vast savanna grasslands – home to some of the most famous predators of kingdom Animalia. 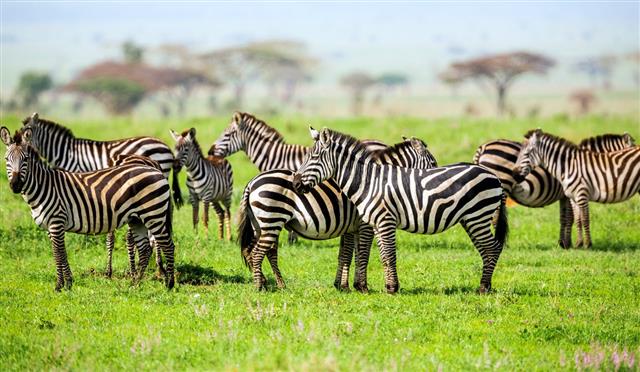 A herd of zebras in African savanna

Zebras, along with horses and donkeys, belong to the Equidae family of kingdom Animalia. The three species of zebras on the planet include the plains zebra (Equus quagga), the Grevy’s zebra (Equus grevyi) and the mountain zebra (Equus zebra). Even though zebras are found in woodlands and on mountain slopes (especially the two sub-species of mountain zebra), their primary habitat spans across the vast open grasslands of savanna. These grasslands are also home to carnivorous animals like the lion, cheetah, hyena, wild dogs, etc., with whom the zebra shares a predator-prey relationship.

In these open plains, the predators have an edge as it is very easy for them to spot their prey. If herbivorous animals like zebra are able to stand against these predators today, it is only because of the survival adaptations that they have developed over the course of time. For zebras, their color pattern, speed, herd behavior, acute senses and other such behavioral and physical adaptations act as a key to survival. Discussed below are these very adaptations of zebra species in detail which will help you understand how this seemingly harmless species survives its predators in the wild.

As we mentioned earlier, the black and white stripes of a zebra happen to be one of the various physical adaptations that they resort to for survival. Other than helping them recognize each other, these stripes also help the species blend into the herd and stay off the predator’s radar.

When predators attack a herd of animals, they generally attack the weakest of the lot. In a herd of zebras however, it becomes difficult for the predator to target an individual and attack it owing to the blending of their stripes. These stripes also make it difficult for nocturnal predators to create an outline of zebras, and protect them from possible predation. Even bloodsucking insects like the tsetse flies are fooled by these stripes when they come across a herd of zebras.

Zebras have a layer of fat under their skin which makes them look fit and healthy. As we mentioned earlier, predators have the tendency to target weakest of the lot. The thick layer of fat in their body makes zebras look fit and healthy. This – along with the black and white stripes, makes all zebras look alike and therefore the predator cannot identify and target the weakest. At the same time, the thin layer of fur on their body doesn’t just save them from insects in these grasslands, but also makes sure that they remain cool in scorching environment which happens to be a characteristic trait of the zebra habitat – owing to its proximity to the equator.

As in case of various other herbivorous animals inhabiting the African savanna, even zebras resort to herd behavior as an effective behavioral adaptation to defend themselves against predators. If they don’t live in groups, zebras – and other hoofed animals of savanna, become easy prey for predators. When a herd of zebra is resting or foraging, one of the individuals in this group keeps watch for any suspicious movement in the surroundings. If it does detect some threat, it warns others by snorting loudly.

Zebras feeding on grass in Savanna

With their ability to clock a speed of 40 mph, the zebras are no doubt amazing runners. Their long legs and highly developed hooves play an important role in making them the fast runners that they are. At the same time, their strong muscles and large lungs help them cover great distances without getting tired. This is a useful adaptation for the zebra species as large predators like the lions are not capable of covering such great distances.

More importantly, their hooves don’t just help them run fast, but also help them defend themselves against animals like the hyena or cheetah. Zebras are known to have a powerful kick which can even kill a hyena or cheetah, and leave species like African lion seriously injured.

As far as the dietary adaptations in zebras are concerned, their matched set of strong incisors and flexible lips help them graze on any type of grass – soft, hard, tall or short with immense ease. More importantly, zebras have a single stomach and the ability to resort to hind-gut fermentation which makes it possible for them to collect a decent amount of forage in their body within a time frame of 24 hours.

All these adaptations have a crucial role to play when it comes to survival of this animal. As you can see in the aforementioned information, the main threat for zebras in their native habitat is that of predation, and the species has well adapted itself to take on various predators which pose a threat. If an African lion takes on zebra, outracing it is the best defense for the species and this is where its ability to run fast over a long distance comes into play. On the other hand, if a cheetah, hyena or wild dogs attack the zebra, it can take on them with their strong hooves and teeth; and can even kill them with its lethal kick. 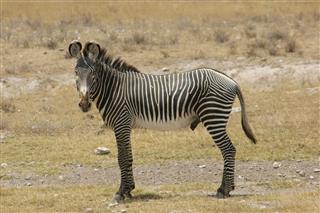 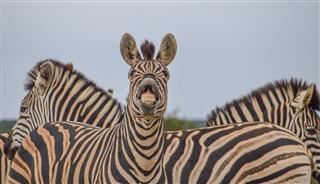 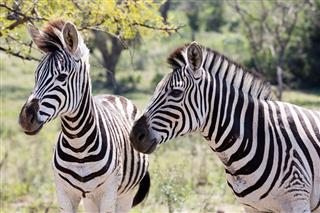 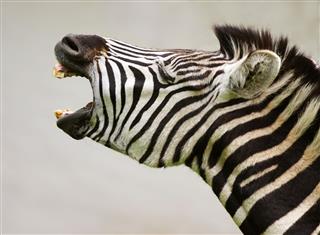 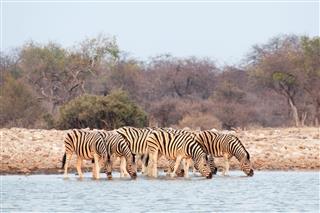 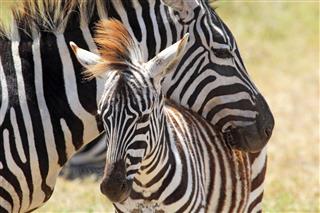 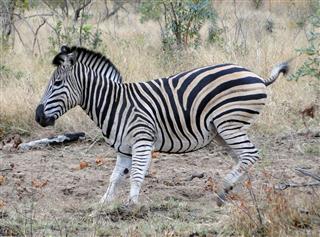 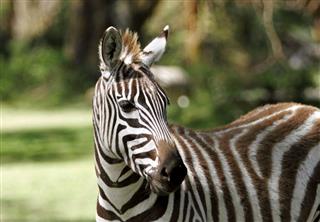 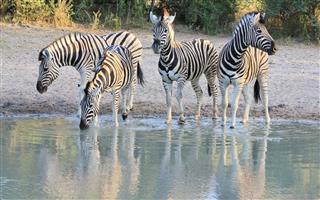