Facts About Triceratops That Will Make Your Blood Run Cold

Triceratops was a genus of dinosaurs that prevailed about 68 to 65 million years ago during the Late Cretaceous Period, and are best known for their striking resemblance to the modern-day rhinoceros. They were the most dreaded dinosaurs on the planet, considered second only to Tyrannosaurus rex.

You are here: Home / Uncategorized / Facts About Triceratops That Will Make Your Blood Run Cold

Triceratops was a genus of dinosaurs that prevailed about 68 to 65 million years ago during the Late Cretaceous Period, and are best known for their striking resemblance to the modern-day rhinoceros. They were the most dreaded dinosaurs on the planet, considered second only to Tyrannosaurus rex. 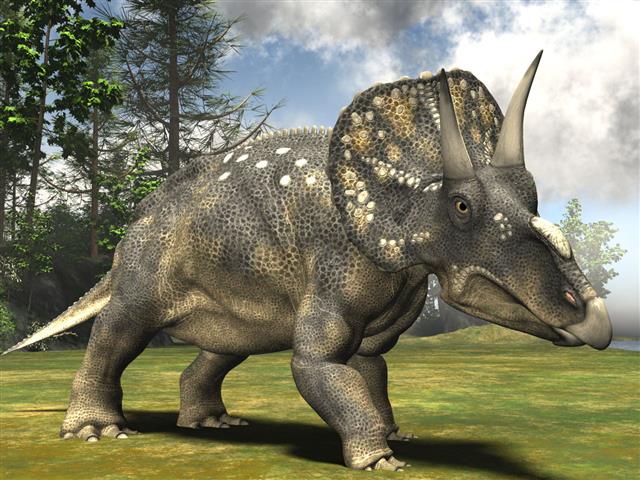 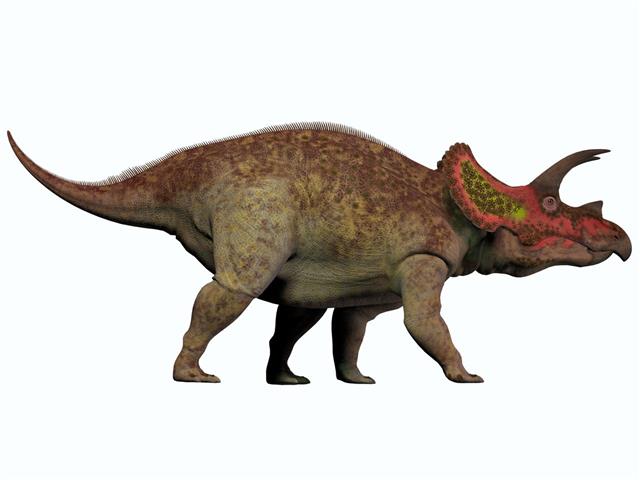 Triceratops were the last of the dinosaurs to be found on the face of the Earth.

Triceratops evolved towards the end of the Mesozoic Era (Age of Reptiles). They were found in large numbers mostly in North America. They existed until the Cretaceous-Paleogene extinction event, which is believed to have brought about the mass extinction of plants and animals; predominantly, the non-avian dinosaurs.

Earlier, after finding sixteen different kinds of skeletal remains, paleontologists believed that there existed as many as sixteen species of Triceratops. After further studies and research though, they concluded that these remains belonged to one of the two Triceratops species, Triceratops horridus and Triceratops prorsus.

The first ever remains of Triceratops were discovered in 1887, near Denver, Colorado by John Bell Hatcher. The specimen that was found was a pair of horns that were attached to a skull roof.

Hatcher worked along with another famous paleontologist, Othniel Charles Marsh, who coined the name Triceratops for these horned dinosaurs.

Ceratopsids are ‘horned dinosaurs’, characterized by huge fringes or bony ridges at the back of their skull.

Triceratops were the largest Ceratopsians.

An average human being’s relative height to that of a Triceratops, is almost one-third.

Triceratops’ head is believed to be the largest head ever measured among all terrestrial animals.

The largest Triceratops’ skull specimen on record is 8 feet (2.5 meters) in length. It has three distinct horns, a bony frill that covers its neck completely, and a sharp, pointed beak.

Triceratops’ skulls were bony, and fossilized relatively quickly and easily. Paleontologists have managed to unearth many invaluable skull specimen in one piece; all of which have been auctioned at high prices.

Two of the three horns on a Triceratops’ head are found directly above its eyes and the third horn is found on its snout. The brow horns were capable of growing up to 3 feet! It has been suggested that they used their horns to display dominance and strength, and also as weapons of attack.

Triceratops were quadrupedals (walked on all fours). They had shorter three-hooved forelimbs and comparatively longer four-hooved hind legs.

It is believed that Triceratops were slow moving reptiles. They were extremely heavy and thus, their relatively smaller limbs made it difficult for them to run or move fast.

Triceratops were found in regions where low-lying vegetation was aplenty. Majority of their population resided in the areas which are now the states of Montana and South Dakota.

Although huge and strong, Triceratops didn’t eat meat and were strict herbivores. Since they were short, they could feed mainly on grass, shrubs, and low-lying grass.

Cycads, stout plants characterized by a hard-wood trunk and stiff palm-like leaves, formed a major part of their diet.

Based on the marks found on their beaks, jawline, and teeth, it is evident that they chewed on sharp and thorny plants.

The social status of Triceratops is questioned till date. The discovery of many lone skeletal remains led officials to believe that these dinosaurs might have preferred to be solitary individuals. However, a Triceratops bone bed (a deposit that contains accumulated bones of one kind or predominated by a single species), which was found in southeastern Montana, made paleontologists reconsider their social status. It is speculated that they might have well continued to exist in herds.

Paleontologists strongly believe that Triceratops and Tyrannosaurus rex co-existed for a long time.

The remains and fossils of the Triceratops and Tyrannosaurus rex have been studied. They date back to the same Cretaceous period of the Mesozoic era. It is also believed that the two were involved in many long-standing battles against each other.

The T. rex fed on Triceratops; this was proved by a team led by Karen Chin. They found a T. rex coprolite (fossilized feces) containing bones of the frill of a Triceratops bones in Saskatchewan, Canada.

It is an almost-circular, bony structure present at the back of the Triceratops’ head, attached to its neck. It primarily acted as a shield for these dinosaurs during fights. Additionally, it was also used to scare away predators.

Paleontologists are not sure about the reproductive methods of Triceratops. However, Fossilized eggs of these animals have led to speculation that they laid eggs and young ones were hatched from these.

Many factors need to be considered when calculating the lifespan of an animal which has been extinct for hundreds of thousands of years now. Paleontologists need a complete and well-preserved specimen of the remains to calculate the lifespan, which has not yet been found. For now, no one really knows what the average lifespan of Triceratops must have been.

Triceratops were the last of the non-avian dinosaurs to have walked on the face of the Earth.

The last of these dinosaurs are believed to have lived almost 68 to 65 million years ago.

It is believed that the Cretaceous-Paleogene event brought about the extinction of the entire race, including the magnificent Triceratops.

Triceratops were one of a kind dinosaurs. Their fossilized skulls have been used as decorative pieces in mansions and castles, and are extremely invaluable pieces of history. Their distinguished appearance led art and film directors to cast their dummies in movies and educational films, the most popular being the Jurassic Park series.

Due to their round and bulky appearance, Triceratops toys, figurines, and games are a rage amongst kids. Triceratops, being the last of their kind, did leave a very intriguing, exciting, and lasting impression on us. 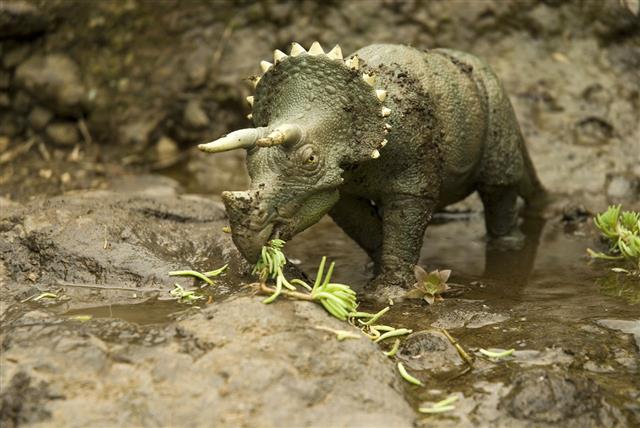