Herrings are widely found in the shallow waters of the North Atlantic and North Pacific oceans. They possess a small head and bright silver body. Here, you can discover some interesting facts about herrings, such as their hunting style, reproduction, and the peculiar habit of forming schools. 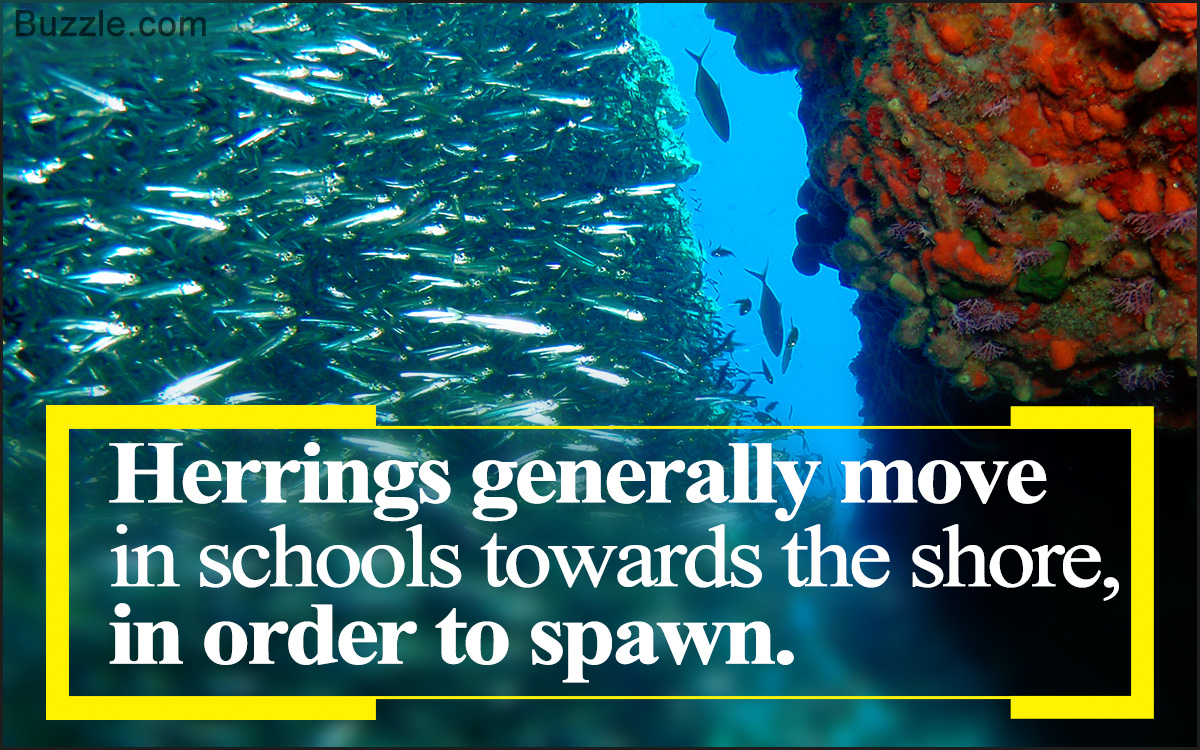 Herrings are widely found in the shallow waters of the North Atlantic and North Pacific oceans. They possess a small head and bright silver body. Here, you can discover some interesting facts about herrings, such as their hunting style, reproduction, and the peculiar habit of forming schools.

Herrings are small and silver colored fish. One important feature is that they possess a single dorsal fin with no lateral line or spines, unlike other fish. A few species have pointed scales. The tail is bifurcated, like a fork. They have a protruding lower jaw on a small head and a laterally flattened, slender, and sleek body. Their flashy color helps conceal them in the surrounding water, and protects them from predators. But the same feature helps humans catch these fish easily.

The Atlantic herring can grow up to a length of 18 inches. It is characterized by a fragile and fusiform (tapering at both the ends) body. The dorsal fin can be found midway. It has a greenish or grayish-blue back, and a silvery abdomen. It can be distinguished by its distinctive circle of small teeth located on the roof of the mouth. This fish can weigh up to 1.5 pounds.

The Pacific herring can grow up to 15 inches in length and is distinguished by its laterally compressed body, a single dorsal fin located midway along the body, and a deeply forked caudal fin. The abdomen and the sides are silvery-white, while the back is bluish-green in color. This fish does contain scales on its head and gill, but possesses large, protruding ventral scales.

The Araucanian herring, also known as the Chilean herring, is dorsally dark blue in color with a silvery abdomen. The Baltic herring is comparatively smaller than its relatives, and grows to a length of only 14 to 18 cm.

Herrings are found in temperate waters of the North Pacific and Atlantic oceans. Atlantic herring are found in places such as the Gulf of Maine, English Channel, Bay of Fundy, Denmark Straits, Norwegian Sea, North Sea, Celtic Sea, Irish Sea, and the Bay of Biscay. The Pacific herring can be found along the California coast from Baja California north, to Alaska and the Bering Sea. In Asia, it can be found south of Japan. Araucanian herring are found in the west coast of South America.

These fish thrive on minute organisms, like plankton, crustaceans, and fish larvae. Phytoplankton are the main food source for young fish, while the adults feed on zooplankton, like copepods, pteropods, and small crustaceans, as well as krill, mysids, annelids, Calanus, fish larvae, larval snails, small fish, and even small animals. They keep their mouths open while swimming, and in the process filter the plankton which pass through their gills.

Herrings attain sexual maturity when they are 3 to 4 years old. They have a life expectancy of 12 to 16 years. However, Australian herring can live from 23 to 25 years. The fertilization is external, as the female and the male fish release masses of adhesive eggs and milts simultaneously. Some fish travel to coastal rivers for spawning. Atlantic herrings usually spawn in coastal waters and in offshore banks.

Mid-summer and December are the ideal time for spawning. The eggs usually take about two weeks to hatch. A female fish can lay from 20,000 to 40,000 eggs, depending on size and age which sink to the bottom and stick to gravel, stones, seaweed, and other objects. The eggs are about 1 to 1.4 mm in diameter, and they cannot survive at temperatures above 66°F.

The hatched larva is usually 5 to 6 mm in length with a nearly transparent body. The eyes are however, pigmented and there is a small yolk sac, that eventually gets absorbed as the larva grows. The larva looks like a small herring, when it reaches a length of about 40 mm. The young fish generally reach adulthood in about 3 to 4 years.

During the day, herrings stay in deep water to avoid their predators. But at night, when the risk of being seen by the predators is less, they come to the surface and keep their mouths open while swimming. Thus, they filter the plankton which happen to pass through their gills. When the concentration of prey reaches a high level, all the members of the school swim with their mouths open and their opercula completely expanded.

Juvenile fish prey on copepods by swimming in a grid and keeping a fixed distance between them, which is equal to the length of the jump of their prey. The copepods use antennae to detect predators by sensing pressure waves. So, when a copepod senses a predator, it jumps at a constant length to escape, and it takes about 60 milliseconds before making each jump. In this time, the endless stream of herrings swimming in that direction eventually allows one to catch the copepod.

Herrings have a number of predators. Apart from man, marine mammals such as dolphins, porpoises, orcas, whales, seals, sea lions, as well as fish, like sharks, salmon, tuna, cod, halibut, swordfish, and striped bass, are the main predators. Seabirds are another important class of predators.

Herrings have been consumed by humans since 3000 B.C. They have immense commercial and economic importance for humans and are used as a delicacy in a number of pasta and salad dishes. They can be fermented, pickled, smoked, cured, and also eaten raw. They are also used for manufacturing fish oil. These fish are a good source of vitamin D, omega-3 fatty acids, and DHA (docosahexaenoic acid).

Herrings are known to swim in large groups, termed as schools. They generally move in groups in the same direction to the shore, in order to spawn. While swimming in vast schools, they provide food to large predators. It was estimated that a herring school in the North Atlantic can be up to 4.8 cubic kilometers with a density of fish between 0.5 to 1 fish per cubic meter, which means that there can be billions of fish in a school.

Pros and Cons of Schooling for Herrings

The most interesting fact about a school is that it features a precise spatial arrangement, which helps maintain a relatively constant cruising speed. It is not clearly understood why fish like herring form schools. Possible advantages are predator confusion, better synchronized hunting, and better orientation. However, schooling has disadvantages as well, as it can lead to the depletion of food and oxygen, and the accumulation of excretory products in the breathing media.