Cecropia moths are beautiful silk moths with some surprising characteristics, indeed. Here's a bit on these curious insects.

You are here: Home / Uncategorized / Awesome Information About the Beautifully Colorful Cecropia Moth

Cecropia moths are beautiful silk moths with some surprising characteristics, indeed. Here’s a bit on these curious insects.

Bolas spiders mimic the pheromone that the Cecropia moths produce, and use it as a trap to attract male moths, which eventually become the spiders’ food.

The largest native moth of North America, the Cecropia moth (Hyalophora cecropia) is a species of giant silk moths. These arthropods belong to the family Saturniidae. The nocturnal moth came into the limelight when, in August 2012, a caterpillar of the species was accidentally sent from Ontario to St. John’s, Newfoundland. The moth is not native to Newfoundland, where the transported caterpillar was allowed to complete its entire life cycle.

Now, the dead body of the moth has been preserved by researchers, and studies are being conducted on the same. This AnimalSake article attempts to shed light on the nature, behavior, and life cycle of these insects.

◆ The Cecropia moths are colorful species of silk moths, with reddish body and brownish wings.

◆ The wings are surrounded by white, tan, and red stripes. There are also some white, crescent-shaped marks.

◆ A fully-grown Cecropia moth bears a wingspan of about five to seven inches, which makes it the largest moth species, native to North America.

◆ The bodies of males are more slender and smaller than the females.

◆ The males have leaf-shaped antennae on their heads, which help them to search for and detect their mates.

◆ These caterpillars are around four inches in length and are rarely found alone.

◆ Cecropia moths are native to North America as mentioned above. They can be found in the regions that lie to the east of the Rocky Mountains in the US.

◆ They are also found in numerous provinces of Canada.

◆ Cecropia moths are known to inhabit the hardwood forests, but can also be found in open areas having trees.

◆ Much like most other moth species, the Cecropia moths are attracted to light. So, if you are lucky enough, you can also spot them around street and/or porch lights.

◆ The Cecropia moths have very elaborate and interesting mating rituals. They begin by finding a suitable mate.

◆ The females emit a special kind of pheromone, in order to attract a male towards them.

◆ The males, on the other hand, make use of their antennae to smell the odor of the pheromone.

◆ The antennae of the males are so sensitive that they can detect the odor that may come from up to a mile away.

◆ When the mates come together, mating lasts for several hours from early morning until late evening, after which the female lays up to a hundred eggs.

◆ After about 10 to 14 days, the eggs hatch, and tiny black caterpillars emerge from within. Their black color is due to the presence of hair on their body.

◆ The caterpillars undergo a series of periodic molts, after which, the color of their body changes to yellowish green.

◆ They also increase in size as they start maturing. By the end of summer, the fully-grown caterpillar locks itself up in the cocoon, and then emerges only during spring as a matured moth.

◆ As an adult, the only function of the Cecropia moth is to mate and reproduce, which it does and dies, thus, completing its life cycle.

◆ As mentioned above, the only purpose of an adult Cecropia moth is to reproduce. Owing to this, an adult doesn’t eat at all.

◆ The adults do not possess any mouth parts or digestive organs in their bodies.

◆ On the other hand, the caterpillars are known to feed on leaves throughout summer. Their typical diet includes leaves of trees, such as maple, poplar, wild cherry, plum, apple, and willow.

Cecropia caterpillars are found in very less numbers, owing to which, they do not pose any sort of major threat to plants. However, small animals, such as squirrels feed on these caterpillars, thus, threatening their population. Notably enough, bright outdoor lights can also harm these moths to a considerable extent. 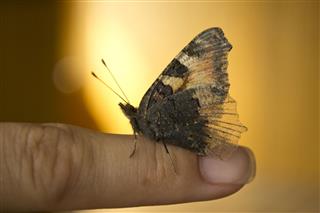 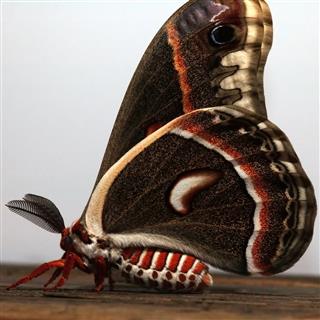