A Turken chicken looks quite weird because of its featherless neck, but the interest for this breed is on the rise. Here's more on what makes the Naked Neck a perfect free-range chicken for modern poultry farms.

You are here: Home / Uncategorized / Wonderful Information About the Turken Chicken (Naked Neck) 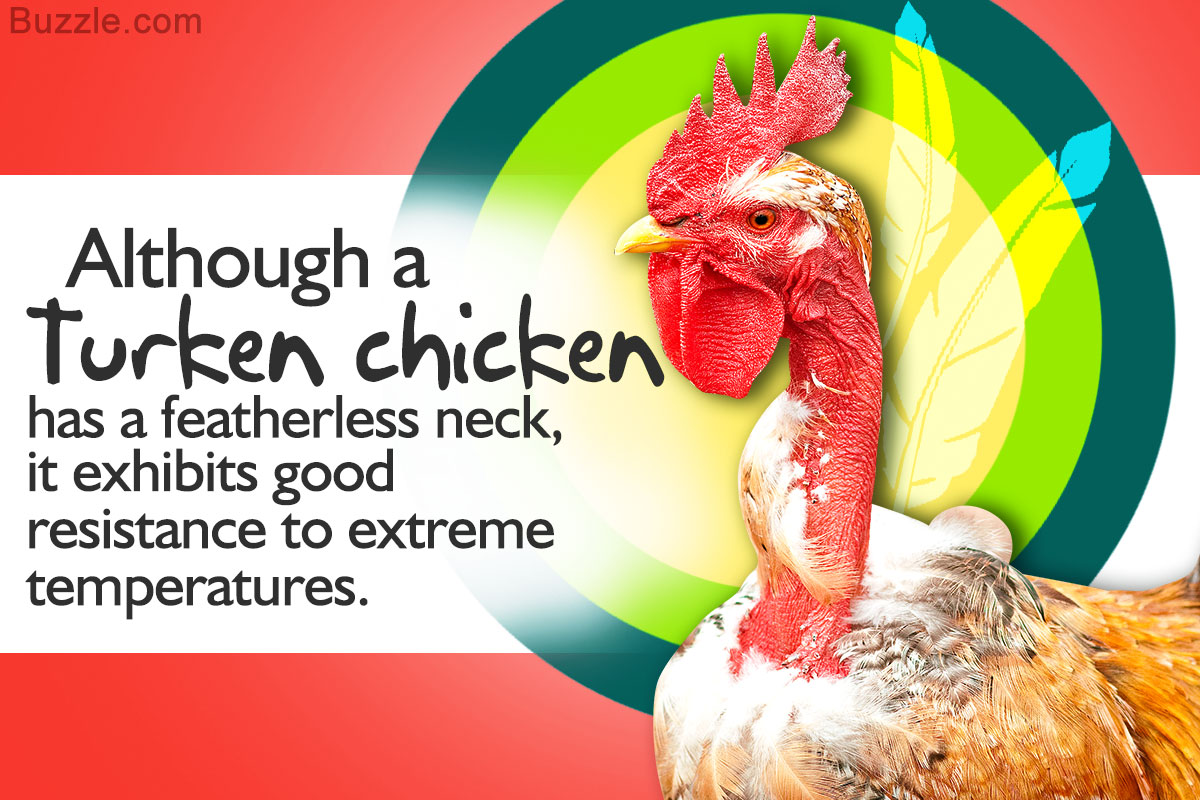 A Turken chicken looks quite weird because of its featherless neck, but the interest for this breed is on the rise. Here’s more on what makes the Naked Neck a perfect free-range chicken for modern poultry farms.

Studies show that there exists a direct relationship between the presence of the Naked Neck gene (Na) and the body weight of the birds. Therefore, Naked Necks tend to be heavier than the normally feathered chickens.

The Turken, an unusual-looking chicken breed, was thought to be a hybrid between a chicken and a turkey. However, experts say that the hypothesis is wrong. Turkey and chicken are genetically incompatible species. So, the hybrid would have been sterile.

There are different views and aspects about the origin of the Naked Neck. Historical evidence shows that a lady called Luiza Hohenberg from Transylvania used to breed Necked Necks about 150 years ago. People from the neighboring countries like France, Germany, England, and Austria must have purchased birds from her stock, and must have started breeding Necked Necks. According to some historians, the first Naked Necks were brought from Asia and were then perfected by Transylvanian and German breeders. As the breed exhibited exceptional characteristics (that had never been seen before), it gained worldwide popularity over the years.

➺ It has been widely accepted that the Naked Neck chicken is native to Transylvania, a Romanian province, that was once a part of the Austrian-Hungarian empire. So, the breed has been claimed by both Romania and Hungary.

➺ Ancient drawings show that the first Naked Necks were cuckoo-colored. They had a rose comb.

➺ There are several breeds of naked-necked chicken, for example, the French Naked Neck, Bantam Naked Neck, etc. Most Turken chickens have a medium-sized single, red comb and an elongated, meaty body. The comb has five well-defined upright points.

➺ The oblong earlobes and the rounded wattles are red. They can be of almost similar length (medium-sized). The color of the skin is usually whitish, yellowish, or light grayish. The black and blue Turkens have blackish legs. The neck is always pink. Necks of females are slightly lighter in color. The neck turns bright red when exposed to sun.

➺ In the U.S., black, white, buff, and red are considered as the standard Turken chicken colors. Apart from these, in U.K., cuckoo and blue Naked Necks are included in the recognized color varieties. The color of the eye is reddish bay. The breed is recognized by the American Standard of Perfection since 1965. In Britain, it was introduced in 1920s.

➺ The tail is slightly spread and has a medium-high carriage.

➺ The breed is immune to most poultry diseases. This makes it simpler to raise. Farmers can keep the chickens healthy without drugs.

➺ The birds have significantly less feathers (about 50% fewer feathers than other chickens) across the entire body. A dominant gene (Na) is responsible for the bird’s turkey-like bare neck, reduced density and size of feathers on the body, exceptional heat resistance, and improved breast size. Despite less feathers and featherless necks, Turkens stand cold weather very well. And they withstand heat better than most other breeds. Thus, they exhibit good resistance to extreme temperatures.

➺ As they have less feathers, they are much easier (and quicker) to pluck for meat purposes. Farmers do not require professional plucking equipment with these chickens.

➺ As these slightly bald-looking chickens have less feathers, they need less protein to grow and maintain the feathers. So whatever protein they consume, is used to produce more eggs and meat. Therefore they are able to lay more eggs (up to 170 in the first year) than other chickens. Turken chicken eggs can be large or medium-sized. The egg color is light brown.

➺ This is a dual-purpose (egg-laying and meat) utility chicken. It exhibits rapid growth. The chickens gain body weight faster than other feathered birds. They have less abdominal fat as compared to feathered chickens. The farmers get a respectable number of eggs. They like to raise the chickens for meat production, because they need less plucking and they have a meaty body. They grow up to 6 pounds or more. The meat is very tasty too.

➺ Females reach maturity at about 6 months. The hens are excellent brooders.

➺ They are good foragers and do well in free-range situations. Modern farms do not use cages. The birds can roam freely. They are fed naturally. As no drugs are used, farmers need hardy, disease-resistant birds. They can label the product as ‘eco-friendly’ and can enjoy some extra benefits. Naked Necks possess all the necessary qualities and so, are perfect for modern poultry farms.

Although the Turkens look somewhat like vultures, they are calm, docile, and friendly. They may not be the most beautiful chickens, but they are one of the easiest chickens to tame and keep. These hardy and vigorous birds, with a ton of benefits for raising them, are perfect for small-scale, sustainable, pastured poultry operations.