Clams are bivalve mollusks that live in saltwater or freshwater habitats. They belong to the family of bivalves consisting of oysters, mussels, scallops, etc. Each one of them have unique characteristics, with different shapes, colors, and sizes.

You are here: Home / Uncategorized / 20 Types of Clams You’ve Probably Never Seen Before 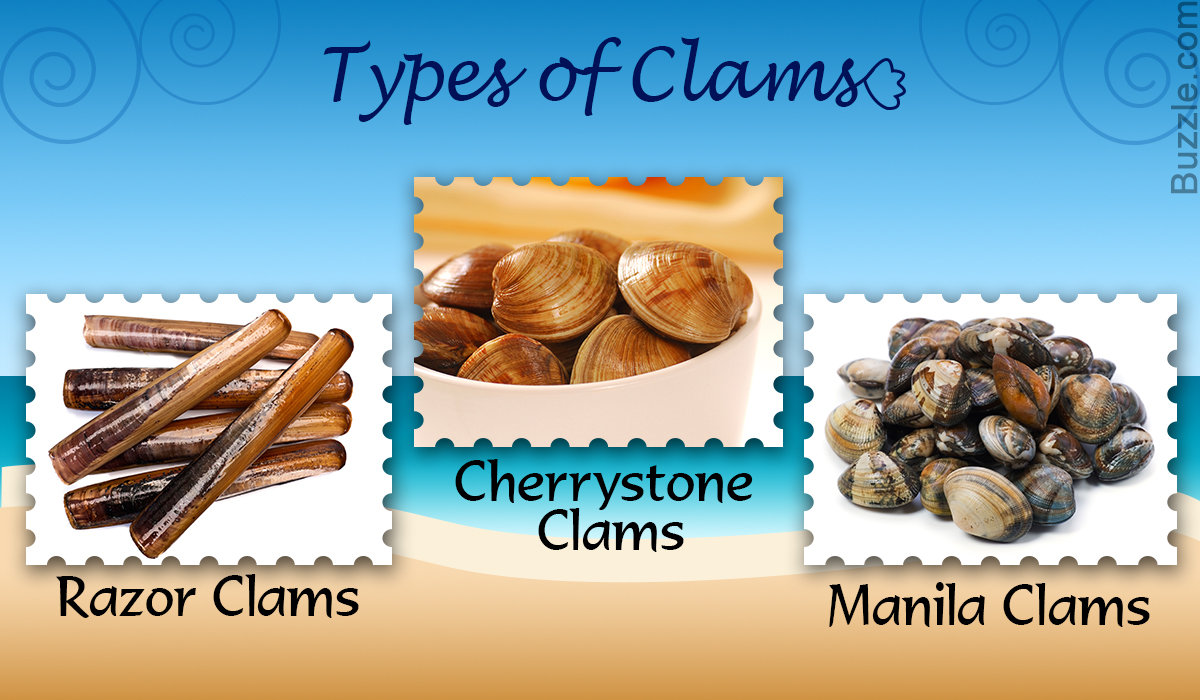 Clams are bivalve mollusks that live in saltwater or freshwater habitats. They belong to the family of bivalves consisting of oysters, mussels, scallops, etc. Each one of them have unique characteristics, with different shapes, colors, and sizes.

M.I.T. researchers have built a metal clone of the Atlantic razor clam, which imitates its technique of digging in the sand.

Clam is a term given to the species of bivalve mollusks. They’re called bivalves since the animal is protected by two shells. There are over thousands of species of clams, and identifying them can be daunting too. Some of these clams are palatable and enjoyed worldwide. They inhabit both the seas and freshwater. Some of them even travel over distances through the flow of water, shipments, etc. Their reproduction usually occurs by expelling sperm and eggs in the water. Digging of clams is undertaken as a recreational or sport activity in some areas.

The edible ones can be steamed, grilled, fried, or enjoyed as soups and chowders. Whatever the case may be, this is a wonderful dish with high nutritional content. Of course, people with certain medical conditions should avoid the intake of clams.

As per the United States Department of Agricultural Research Service, the nutritional content of ‘Mollusks, clams, mixed species, cooked, moist heat’ is: 3 ounce (85 gm) of steamed clams has around 57 mg of cholesterol, 2.39 mg of iron, 78 mg of calcium, and 84.06 μg of Vitamin B-12. 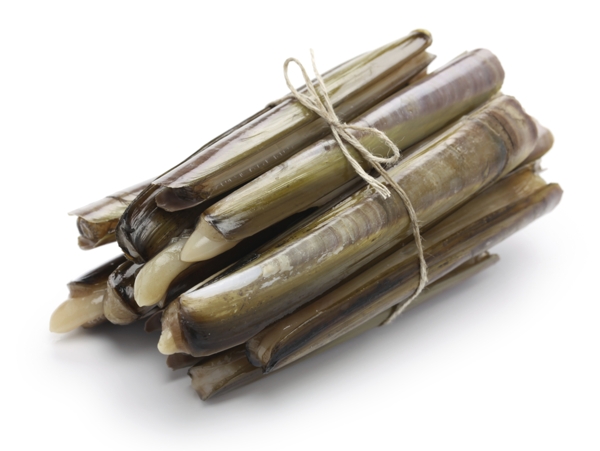 Scientific name: Ensis directus
Their resemblance to a razor or a jackknife justifies the name. It is a very fast burrower, and is found on the Atlantic coast from South Carolina to Canada. Its ability to expel water and propel itself through the water is through the rapid opening and closing of its shell. It is protected from erosion by a greenish-yellow periostracom.

Cherrystones are mid-size hard clams in the size of around 3 inches, whereas, littleneck clams span around 1 to 2 inches. Hard clams typically have large rings on their surface. They’re usually found in the eastern coast of the United States and Gulf of Mexico, and prefer saline waters.

Littlenecks, quahogs, cherrystones, etc., are types of hard-shell clams. Soft-shells have shells that are brittle and thin, and the flesh is easy to cook. Their shells do not close completely, hence, they’ve a shorter life than hard-shell clams. 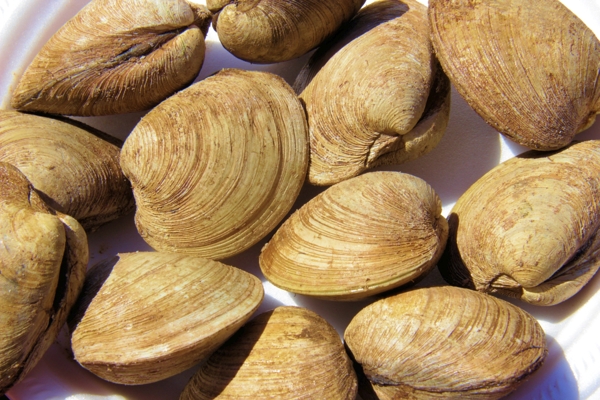 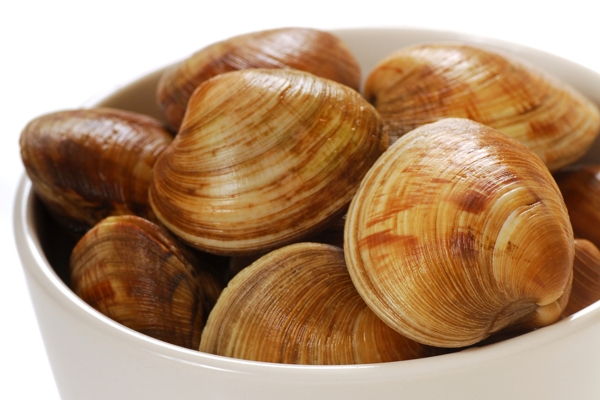 One of the largest producers of hard clams is the United States. 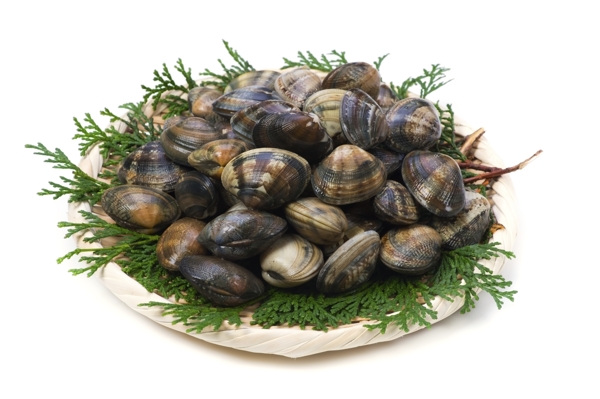 Manila clams are dioecious, and become sexually mature from the first to third year of their life.

Scientific name: Venerupis philippinarum/Ruditapes philippinarum
It has a thick shell, with rings and ridges, and an umbo that depresses towards the head-end. It is native to Japan, and was accidentally introduced in the Pacific coast through a shipment, and has now spread to the coasts extending from California to British Columbia. 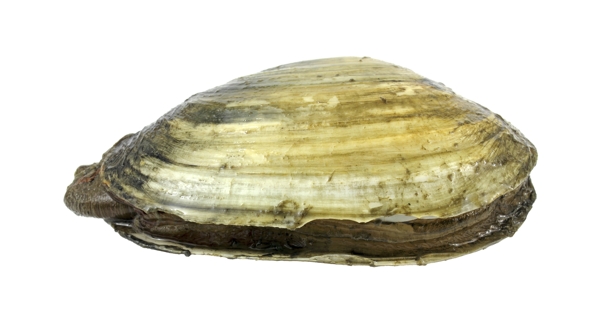 The two halves of a soft-shell clam are unequal in size.

Scientific name: Mya arenaria
Before cooking, it is recommended to keep them in salt water for a few days so that the sand is expulsed from the digestive track. Since they can also be steamed, they’re also known as steamers. Their shells are whitish, and very thin and brittle. Since their siphons are fused together, they have a ‘long neck’. 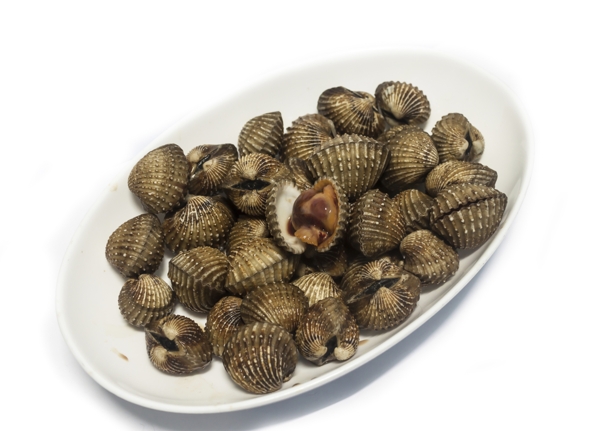 The phrase ‘open the cockles of my heart’ means that something has touched an innermost feeling or emotion in your heart.

Scientific name: Cardiidae/Austrovenus stutchburyi
These clams can be easily identified: if they have prominent ribs, they’re cockles. They’re bivalve mollusks and resemble a heart. They’re very tiny, even smaller than littlenecks, but worth the taste. Of course, cooking might become a time-consuming and daunting affair due to the small size. 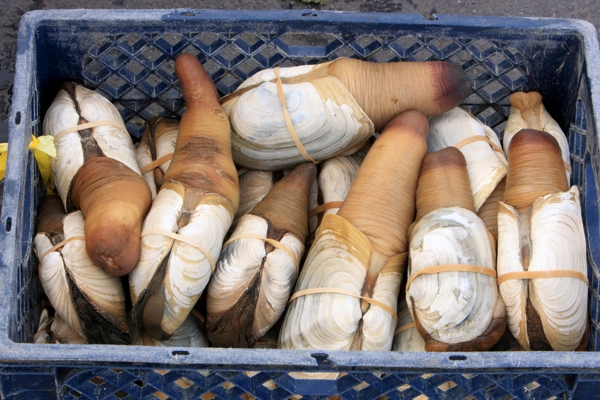 This weird looking clam is the largest burrowing clam in the world.

Scientific name: Panopea generosa
They possess a very long siphon that looks akin to an elephant’s trunk. Though its look is slightly bizarre, this is one of those creatures who have long lives. These can be eaten raw or cooked too. The habitat ranges from Alaska to Baja California. 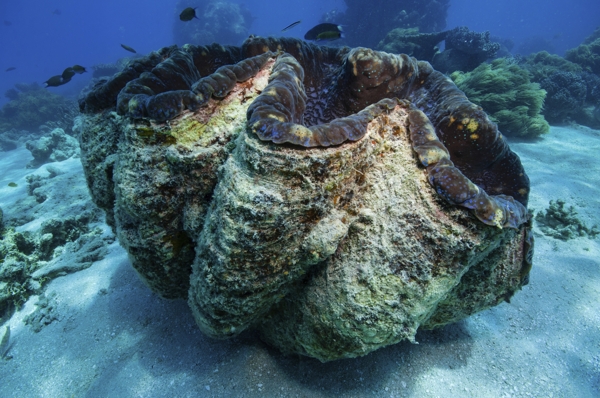 No two giant clams can have the same coloration.

Scientific name: Tridacna gigas
Listed as a vulnerable species, thanks to their over-harvesting by humans, this clam is sessile, and stays at the same place for its entire life. It comes in a brilliant combination of hues, such as pink, blue, green, brown, yellow, etc., that make it visually beautiful. An interesting fact of this clam is that, no two giant clams can have the same coloration. They thrive with algae, providing them with an abode to live, in exchange of the sugars and proteins produced by the algae. Its weight can be more than 200 kg. They’re usually found in the warm waters of the Indian and Pacific Ocean. 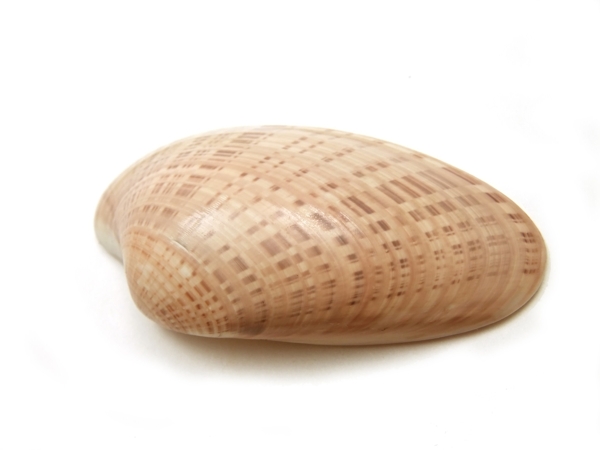 It is said that these clams were relished by Calusa people.

Scientific Name: Macrocallista nimbosa
In the United States, it is native to Florida, and a recent entrant in the market. They’re sweet in taste, and have a shinier appearance than other clams, with a unique radiating sunburst appearance. 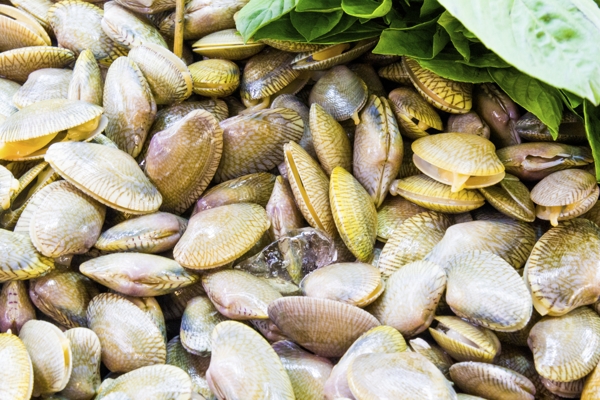 Surf clams are rich in selenium and niacin. 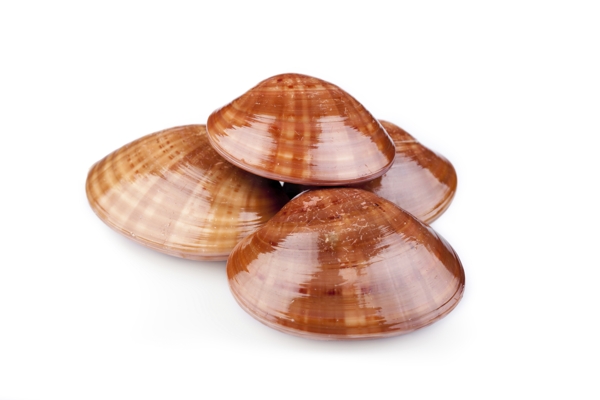 The shiny surface of ‘smooth clams’

Scientific name: Callista chione
Its glaring feature is its glossy surface. Its color is creamy white with tinges of brown, and is majorly found in the Mediterranean Sea. They feed by filtering food from water. 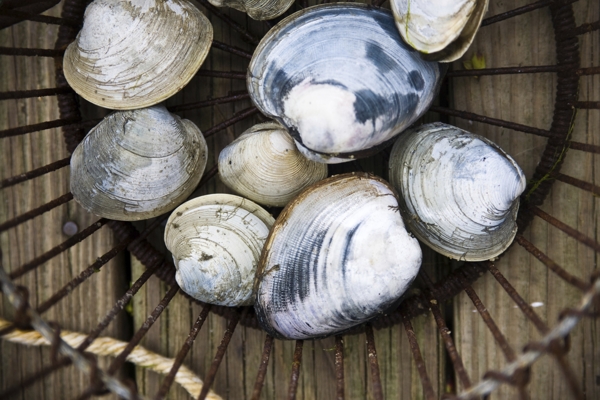 Ocean quahogs have to be at least 20 years of age to be of commercially harvestable size. They usually burrow themselves in deep waters, hiding beneath the sand, making it difficult for predators to prey on them. The smaller ocean clams are popularly known as ‘mahogany’ clams. Ocean quahogs are around 2.8 to 4.3 inches in size. 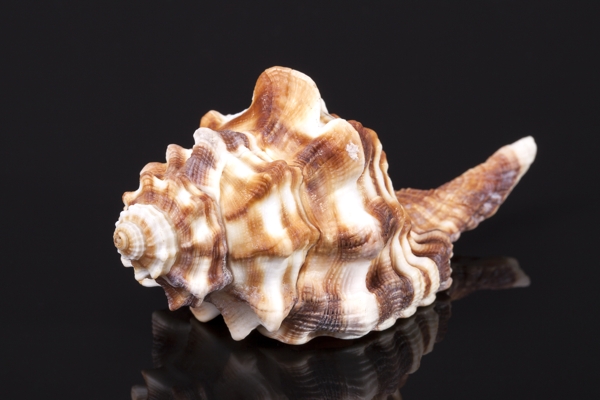 These are considered sport clams in Oregon. Owing to the tough skin, it is often ignored by diggers. Though they are edible, this clam is less hunted due to the lesser meat content.

This clam prefers salinity, and is mostly used for making chowders. However, they’re prone to paralytic shellfish poisoning (PSP). Hence, one must be sure before harvesting or consuming them. They usually find their habitats in the lower intertidal and shallow sub-tidal zone, and are found from Alaska to California.

They’re triangular in shape, and their siphons are separate. Owing to the shape, these are also known as the ‘bent-nose’ clam, since their valves are bent to the right. 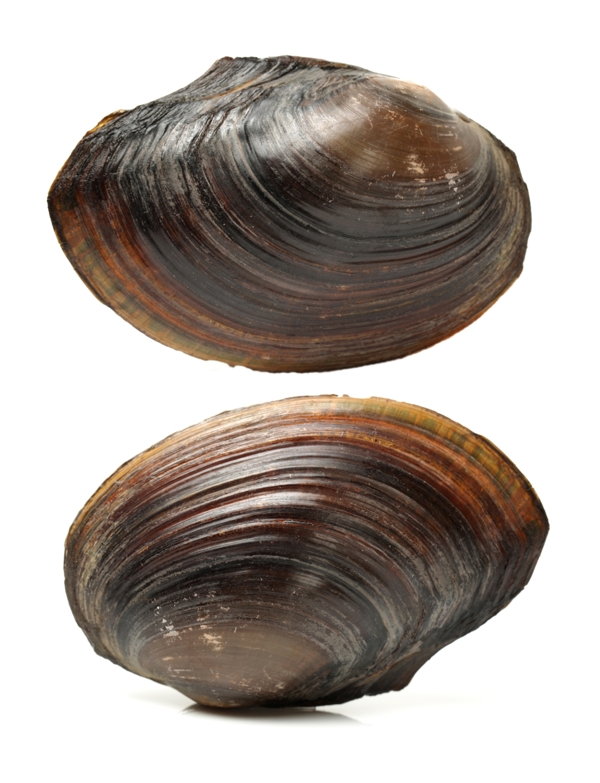 As the name suggests, this clam is found in eastern and southern Asia. Its color is yellowish brown, and can they spread easily even by human transport. They can reproduce up to 100,000 clams every year. 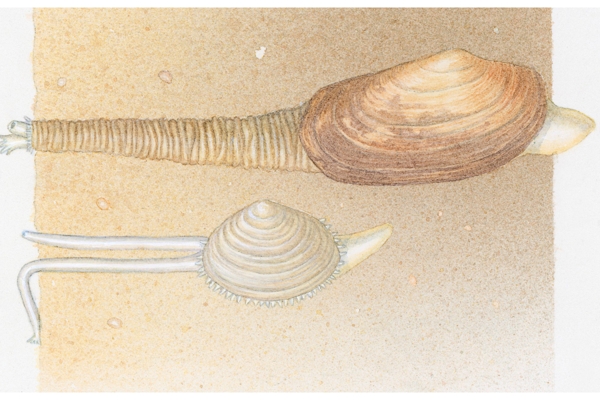 The identification of a peppery furrow shell is its star-shape markings made by its inhalant siphon. It is mostly found in European sea coasts. 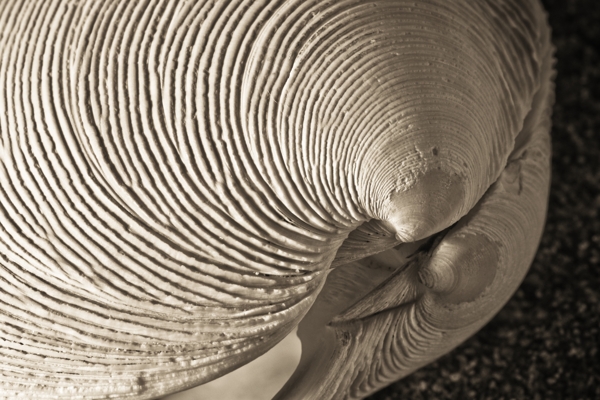 It is mainly produced in European nations such as France, Spain, and Italy. With a broad oval shape, it is usually of cream or brown color. However, it has markings of dark color. 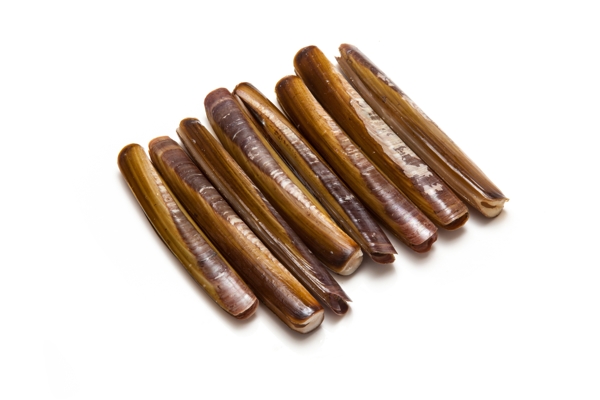 The peculiarity is its oblong shell, whose length may extend more than 7 inches. Its meat resembles a razor. Many enjoy razor digging as a family-sport. However, it is subject to rules and regulations. It is a meaty clamp that has been savored a lot, finding its way in soups and chowders. Its life expectancy may differ as per different areas. 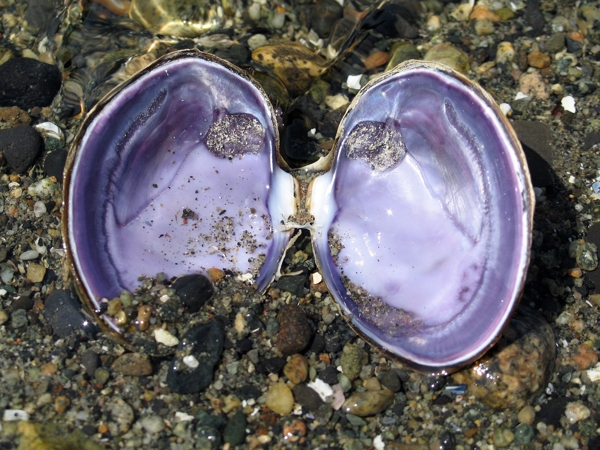 Its unique feature is the varnish texture, with the insides in purple color. Originally, it was native to Japan. However, it is now harvested in the United States too. Also known as the dark mahogany clam, it is considered as an invasive species in certain areas. 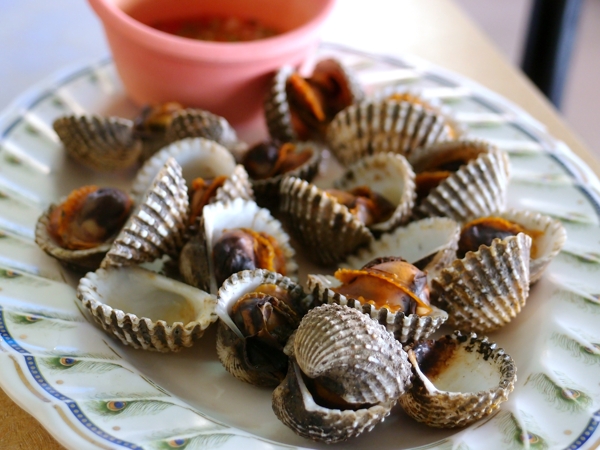 Ark clams belong to the family of Arcidae, consisting of many species. Their surface is ribbed, and they are squarish in shape. They have a thick layer of periostracum on their shells.

Some of these clams are facing threats due to over-harvesting. Of course, if we want future generations to know about clams, it is necessary that we follow the requisite harvesting guidelines of the authorities. Also, be careful with the cleaning and storing of clams, before consuming them. Needless to say, take enough precautions before consuming clams, since some of them might be prone to poisoning due to toxic elements and contamination.