If you think that the caterpillars that turn into pretty butterflies later aren't poisonous, then think again. This article lists a few poisonous caterpillars which have vibrant colors but could cause much more than just pain.

You are here: Home / Uncategorized / 5 Crazily Poisonous Caterpillars You Surely Didn’t Know About 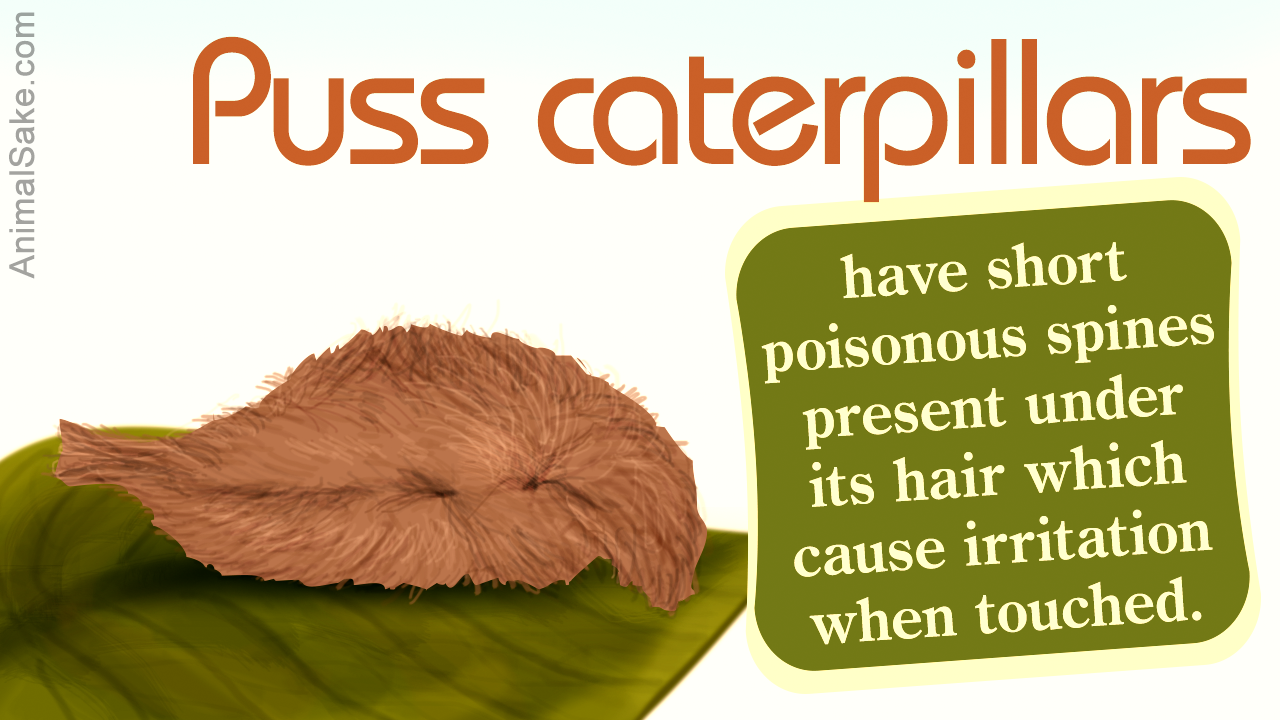 If you think that the caterpillars that turn into pretty butterflies later aren’t poisonous, then think again. This article lists a few poisonous caterpillars which have vibrant colors but could cause much more than just pain.

Commonly known as the larval forms of butterflies, caterpillars are a member of the order Lepidoptera. Most of these caterpillars are herbivores but some selected species are insectivorous, all of them being voracious feeders. Anatomically, caterpillars have a tubular segmented body, with three pairs of true legs on the three thoracic segments and up to four pairs of prolegs on the middle segments of the abdomen. They also have a single pair of prolegs on the last abdominal segment. They have very good vision and breathe through a series of tiny openings along the sides of the thorax and abdomen, known as spiracles. Many caterpillars can detect vibrations of wings and other movements around them for defense purposes. Like the variety in their appearances, habits, and habitats, there is also a classification which depends on them being poisonous and non-poisonous.

There are many venomous caterpillars which belong to many species, and each of them have their own unique defense mechanisms. However, those that are known to be poisonous in nature have a slight difference in their appearance. The ones mentioned in the following paragraphs are some of the most well-known poisonous caterpillars.

It is known as the monkey slug and is very easy to identify, as it is a full-grown, brown, and hairy caterpillar, which is 5/8 inch long. The third, fifth, and seventh pairs of its processes are generally twisted, and thus it is known as the hag. It feeds on the foliage of trees like the dogwood, ash, apple, willow, and oak. It breeds in the months of August and September. 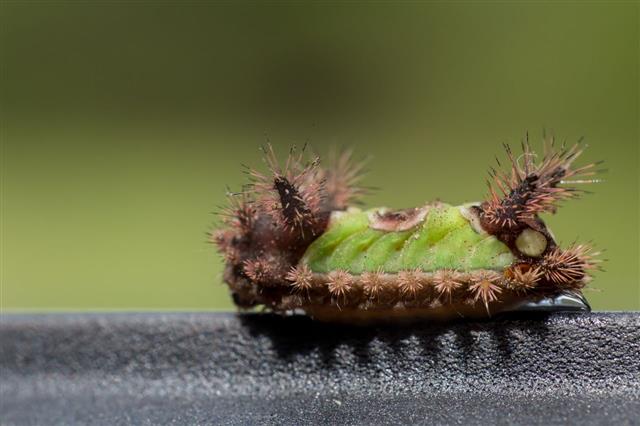 This is the most commonly-found slug which can be identified without any information even in its stages of development. It is 1 inch long, with a very prominent green saddle on the back of its dark-brown body. It also has prominent horns which bear spines for protection. This is a very poisonous caterpillar and can create severe problems in the body. It feeds on the foliage of the above mentioned tress as well and is solitary too. 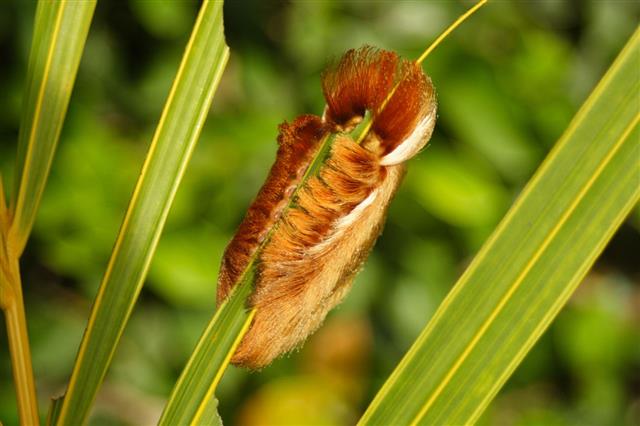 It is a one-inch caterpillar which is densely-covered with a woolly coat of soft brown hair and a tail like end in the back. There are several short poisonous spines which are present under these hair and they cause instant irritation when touched. This caterpillar however, is not a solitary feeder and is found in groups feeding on the leaves of the maple, oak, and hack berry trees. The sting of this caterpillar is more poisonous than the others. 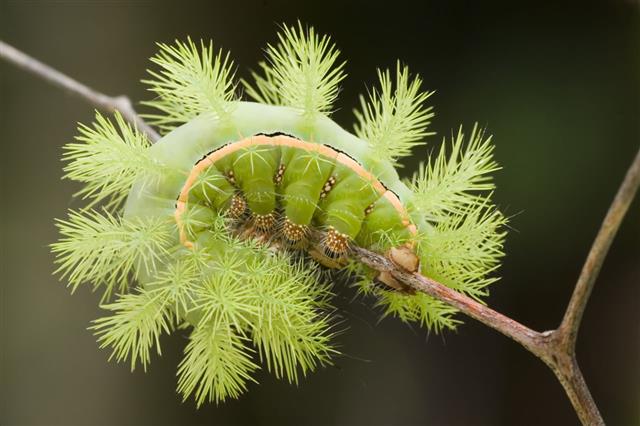 The Io moth belongs to the giant silkworm caterpillars, which are leaf feeders and have numerous spines on their body. This particular type of poisonous caterpillar is light-green overall with a narrow red band on either side along with a white band under it. It is two inches long and is completely covered with branched and black, pointed green spines. The Io moth is also a foliage eater and it feeds on the leaves of the elm, beech, clover, apple, willow, corn, and roses.

This caterpillar belongs to the slug type and is a yellow to red-colored creature. It has red spines with black and blue stripes which run down the middle of its back. It also has very prominent, poisonous, spiny yellow horns in the front, rear, and center of its body. It feeds on bushes and tree branches of the oak, bayberry, and sycamore trees.

There are many more poisonous caterpillars in nature, but this list included the most commonly-found and the most dangerous ones among all the species. 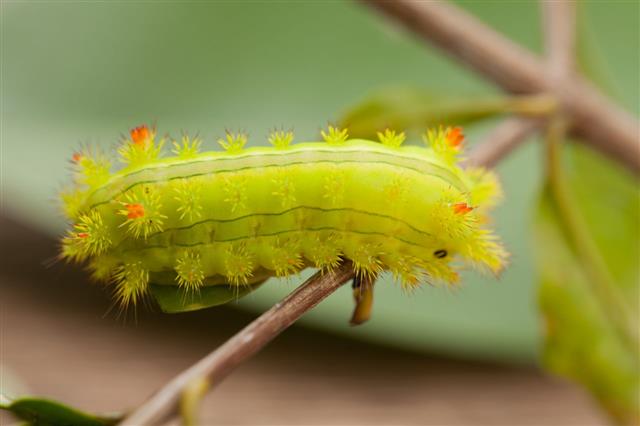 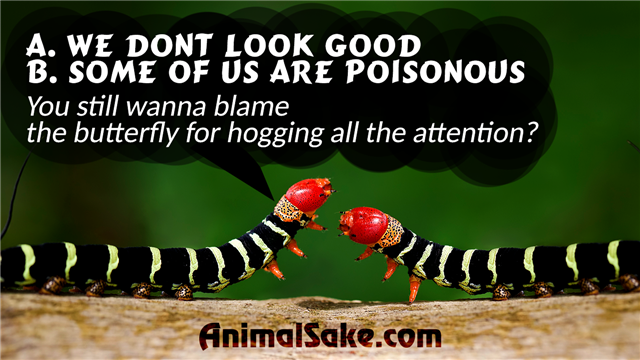