Understanding the Eating Habits of Crocodiles

What do crocodiles eat? Crocodiles are carnivorous and dine on a variety of animals, including fish, zebras, monkeys, cattle, and even members of their own reptile family. The following AnimalSake article elaborates more on the eating habits of crocodiles.

You are here: Home / Uncategorized / Understanding the Eating Habits of Crocodiles

What do crocodiles eat? Crocodiles are carnivorous and dine on a variety of animals, including fish, zebras, monkeys, cattle, and even members of their own reptile family. The following AnimalSake article elaborates more on the eating habits of crocodiles.

When food is scarce, some species of crocodiles are known to survive without food for up to 12 months.

One of the oldest surviving species on the planet, crocodiles have evolved as one of the deadliest predators to inhabit lakes and rivers. Their streamlined bodies, long, broad tails, razor-sharp teeth, along with an incredible bite force, make them ideal ambush predators. They often patiently wait for their prey to come close within their range and are even known to jump half their body lengths out of the water to snap at their prey.

Imagine being a prey with a humongous crocodile snapping at you, scary isn’t it? Well, to be honest, just looking at them also gives me the jitters. But do we humans also classify as prey for crocodiles? Crocodile experts say that they are generally shy animals and will run away from humans. But what do crocodiles eat? Let us try to find out the eating habits of crocodiles through this article.

What Do Crocodiles Eat?

Crocodiles are hardcore meat eaters and it doesn’t matter whether the meat is fresh, rotten or stinky. It is not uncommon to notice crocodile mincing meat of animals like wild boar, deer, antelope, pigs, monkeys, and dogs. Small vertebrates like fish are a delicacy for most species of crocodiles. They also don’t feel wrong in hunting members of their own reptile family, which means they also eat snakes, even the large ones that include anacondas. Also, the hard shell of turtles does not seem to discourage crocodiles from chomping on them.

Size Does Not Matter

Also, size of prey isn’t really a worry for large or giant crocodiles. For instance, water buffaloes, cows, wildebeests, young giraffes, and even baby elephants, when crossing shallow water streams and swamps can easily fall prey to ferocious attacks of crocodiles. A really hungry crocodile is known to even leap into the air to catch birds and bats.

Feast on Shark Too!

Crocodiles can prey on anything that enters their territory, even sharks. The bull shark that predominantly navigates in warm shallow waters, saltwater, and freshwater can also become the source of food for crocodiles. Of course, this is a rarity and one such instance was noticed at Yellow Water, Kakadu National Park, Australia, in June 2010. The predator was a huge 5-meter crocodile that made a meal of a bull shark. Bull sharks grow up to 81 cm long and weigh anywhere between 200 to 290 lbs. No wonder, crocodiles are considered to be one of the most dangerous predators living on this planet.

What Do Baby Crocodiles Eat?

Also referred to as hatchlings, baby crocodiles are too small to hunt for larger prey. Mostly they prey on water insects. Crustaceans such as aquatic snails are a common food source for these baby crocodiles. As they begin to grow, they start hunting for frogs and small fish. The juvenile or young crocodiles are often seen feasting on shrimp.

Well, yes, you heard it right, crocodiles are cannibalistic. In fact, it is relatively common to notice crocodiles living in saltwater and freshwater showing cannibalistic behavior. During the nesting season when there is acute shortage of food, adult crocodiles tend to gobble baby and young ones. So if you ever visit the Daintree river in Queensland, Australia, don’t be surprised to see a giant crocodile eating a smaller one. Some experts say that male crocodiles may exhibit cannibalism mostly to decrease the competition for prey.

Yes, crocodiles are seen swallowing stones and rocks but not to satiate their hunger. The only purpose to ingest these inedible things is to help with their digestion. They acts as a digestive aid and help to grind the food that is ingested. Once inside the stomach, the rocks and stones help in breaking down the prey including its bones. Moreover, these stones and rocks also increase the weight of the crocodile, allowing it to remain underwater. Rock and stone debris weighing 10-15 pounds is usually found inside an adult crocodile’s stomach.

Even humans accidentally going near them can fall prey to these monsters. In fact, the Nile crocodile and the saltwater crocodile are infamous for feasting on humans. On a concluding note, the diet of crocodiles is diverse but they are essentially carnivores and make a meal of anything that comes their way. 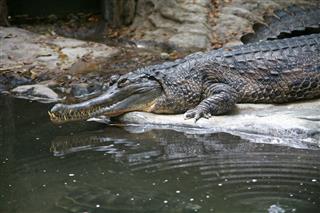 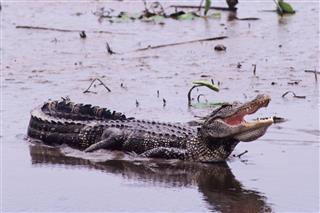 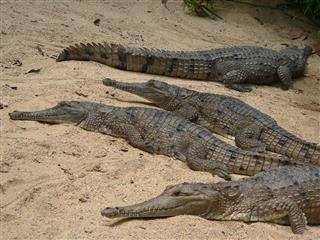 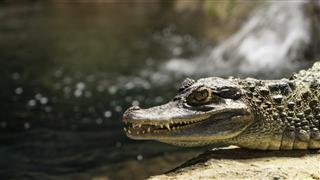 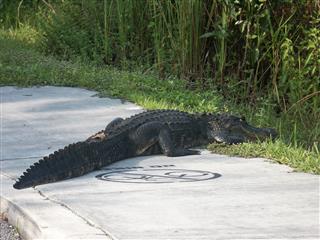 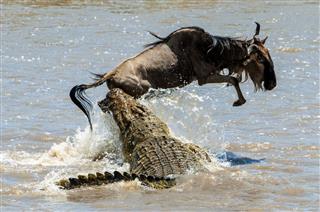 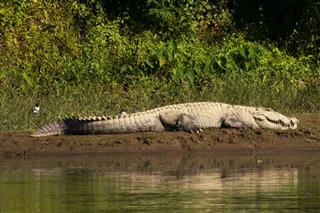