These Facts About Water Scorpions Will Leave You Baffled

Water scorpions are water bugs which slightly resemble the land scorpions. This article lists some facts about the same.

You are here: Home / Uncategorized / These Facts About Water Scorpions Will Leave You Baffled

Water scorpions are water bugs which slightly resemble the land scorpions. This article lists some facts about the same. 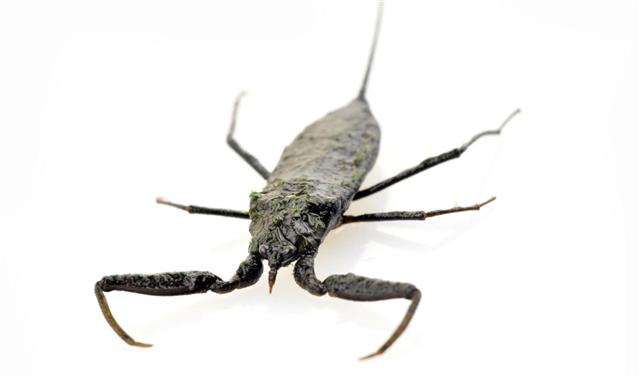 Water scorpions are aquatic insects that are found all over the world. They belong to the order Hemiptera (true bugs) and sub-order Heteroptera. The characteristic feature of this order is the long sucking rostrum (beak) that lies in the small head. These insects got the name because of their superficial resemblance with the land scorpions. They possess special grasping forelimbs that are similar to the anterior pincers of land scorpions. Also, their elongated siphon resembles the stinging tail. However, unlike the tail of land scorpions, the siphon of these water bugs lacks the venomous spine.

There are two common genera of these insects, namely Ranatra genus and Nepa genus. Members of Ranatra are long and stick-like, and are often referred to as needle bugs. Members of Nepa are broad and leaf-like.

These insects are dark-brown or blackish-brown in color. They are about one to two inches in length. They have two pairs of wings and three pairs of legs. Although these are flying insects with well-developed wings, they prefer to walk in the mud or between aquatic plants. They are poor swimmers and spend most of their life near the shoreline. They swim by moving their front legs and kicking their middle and hind legs. They breathe with the help of a siphon, which is used for obtaining air from the water surface. The siphon, also known as a breathing tube, is a structure of two respiratory tubes that are pressed against each other. In case of an immature water scorpion, the siphon is not developed and breathing takes place with the help of abdominal spiracles.

These insects usually live among the stems of aquatic weeds and in the mud of ponds, streams, and rivers. Sometimes, they are found under the rocks in a flowing stream. Like most of the other insects, these are air breathers. They carry a submerged air bubble for the purpose of breathing under water. In case of air depletion, they come up to the surface for oxygen.

They are carnivores and feed on small fish, tadpoles, and other aquatic insects. The most interesting feature is their feeding habit. They hang still with their body upside down, until the prey is within their grasp. Another added advantage is their excellent camouflage, which makes them inconspicuous to their prey. Usually, they hide among the plant debris to ambush their prey. Once a prey approaches, the insect seizes it with its hind legs. It then injects a digestive enzyme in the prey and sucks out the body fluids, leaving behind an empty shell.

Mostly, these insects breed in the spring. They produce only one brood per year. The females lay eggs among the leaf debris or in the stem of aquatic vegetation. Each of the eggs is provided with seven long filaments at one end. The eggs cling to each other with the help of these filaments and form long chains. Some of the species lay their eggs on the males’ backs. During the process, the female secretes a waterproof glue that helps in fixing the eggs. The male then looks after the eggs till they hatch. After about three weeks, the eggs hatch into ‘nymphs’ (larval stage). The nymphs are similar to the adult water scorpions except for their size and lack of wings. They pass five molts (shedding of the exoskeleton) till maturation.

The water scorpion’s sting is very painful, so they should be handled carefully. However, their sting is not poisonous like that of a land scorpion.