What do Jellyfish Eat

Jellyfish are mysterious in their own way, so it isn't surprising that we know very little about what they eat ... or other related attributes of their dietary behavior.

You are here: Home / Uncategorized / What do Jellyfish Eat

Jellyfish are mysterious in their own way, so it isn’t surprising that we know very little about what they eat … or other related attributes of their dietary behavior.

Jellyfish are ravenous feeders and have a gastrovascular cavity that functions as their stomach. Their mouth is located under their bell-shaped body. Jellyfish function more efficiently than a whole lot of other organisms on the planet, despite the fact that they lack a brain and central nervous system.

What do They Eat?

With over 200 jellyfish species found in the oceanic waters around the world, it is very difficult to answer that question. To begin with, jellyfish are carnivores and eat a lot of food. They feed on a variety of zooplanktons and crustaceans, as well as eggs and larvae of other marine organisms. They are passive hunters that drift along the water current, waiting for a potential prey to get trapped in their tentacles.

Larger, deadly jellyfish that are aggressive hunters prey on small fish and crustaceans, like shrimp, or other jellyfish. In fact, some species of jellyfish can eat a jellyfish that is as large as themselves. Spotted jellyfish are filter feeders and consume seawater to absorb their food. They also consume large quantities of useful zooplankton, thus causing an imbalance in the marine life at times. They also eat eggs and larvae of marine creatures that have a huge commercial value.

If you own a jellyfish, you can feed it live food. You can try breeding brine shrimp at home so that you have a long-term supply of live food ready for your pet jellyfish. You can also get freeze-dried brine shrimp eggs, hatch them in salt water for about 24 hours, and feed it to your jellyfish after separating the larvae from egg shells. Many public aquariums feed chopped fish and blended krill to jellyfish. If you are a hobbyist, you can even resort to frozen foods specially made for these invertebrates.

How Do They Catch Their Prey?

Jellyfish use their tentacles to catch the prey. Their tentacles have thousands of nematocysts containing venom or cnidocytes with stinging capsules. They have a highly developed nervous system that activates the cnidocytes the minute a prey comes in contact with them. Like a bullet, the nematocysts are shot at the prey. They get attached to the prey skin and the venom is released. The venom stuns the prey and the jellyfish makes a meal out it. The jellyfish wraps its long tentacles around the stunned prey and pulls it towards its mouth. The prey is then moved to the chamber next to the mouth where it gets digested and assimilated. The same opening is then used to release the waste.

So basically, a jellyfish is a meat-eater, which feeds on other marine creatures. What’s surprising though, is the fact that it is made up of 95% water, and still has a huge appetite! 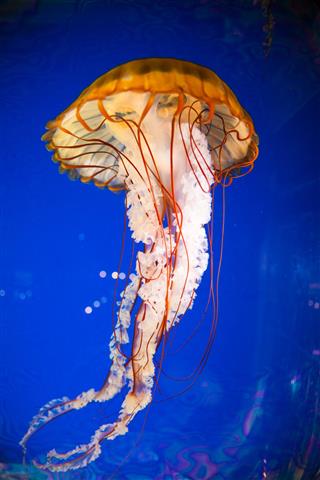 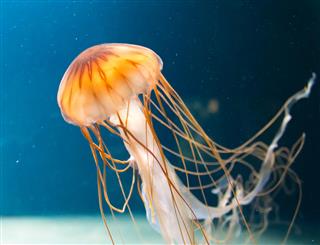 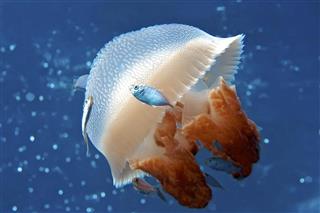 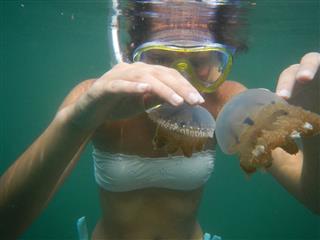