What Do Sea Turtles Eat? It’s Not What You Think

Sea turtles! Herbivores, carnivores or omnivores? Well, the answer to this question depends on various factors which play a crucial role in influencing the diverse eating habits of the seven extant species of sea turtles.

You are here: Home / Uncategorized / What Do Sea Turtles Eat? It’s Not What You Think 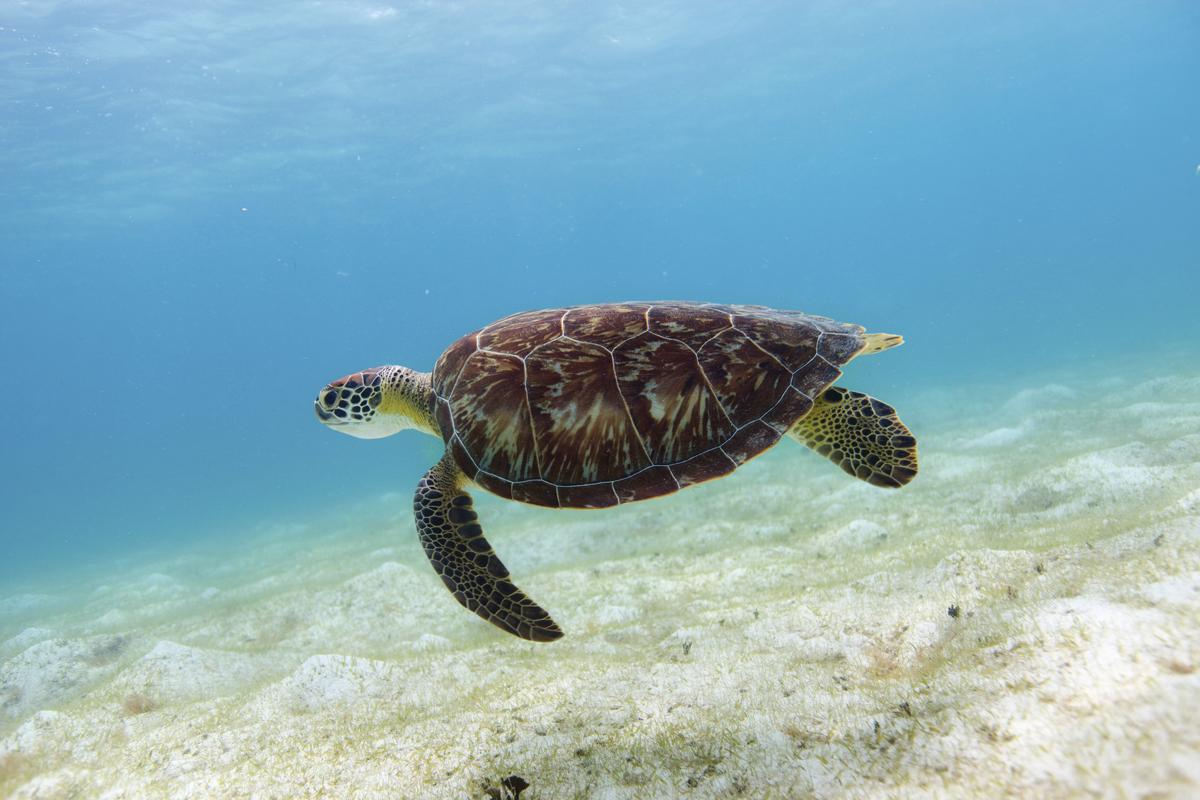 Sea turtles! Herbivores, carnivores or omnivores? Well, the answer to this question depends on various factors which play a crucial role in influencing the diverse eating habits of the seven extant species of sea turtles. 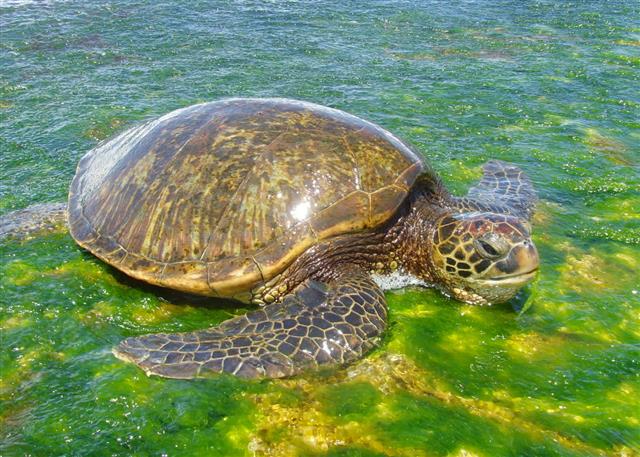 The diet of a sea turtle depends on factors like species, habitat, geographical distribution and physical features. Apart from these, age is also a deciding factor when it comes to a sea turtle’s diet. As hatchlings, these turtles usually follow a carnivorous diet comprising various food items like fish eggs, seaweed, jellies, pelagic mollusks and crustaceans and hydrozoans. Although, most of them continue to be carnivores, the hatchlings of a green sea turtle shift from carnivorous to a complete herbivorous diet when they reach the juvenile stage. Other adult species like loggerhead, hawksbill, etc., prefer a diet related to their specialized physical characteristics. Given below are the details about the names, geographical range of each sea turtle species and their correspondent food sources.

Geographical Range: The population of this species is widely distributed across the waters of Africa, Norway, New Zealand, Atlantic and the Cape of Good Hope. However they are abundant in the Rantau Abang beach, Malaysia.

Geographical Range: While prominent residents of the Gulf of Mexico, they are also found in Nova Scotia.

Eating Habits: The jaws of this species, similar to that of loggerheads, are built for grinding and crushing. They feed on crabs, shrimp, mollusks, jellyfish and vegetation. Crabs are their favorite food, foraging which these turtles are found mostly at the muddy bottoms of oceans in search of their food. However when there is scarcity of crabs they have to adapt to other food sources like seaweed and sargassum.

Eating Habits: They feed on crabs, shrimp, rock lobsters, tunicates, jellyfish. When there is scarcity or unavailability of these foods they feed on thin, thread-like algae. They have very powerful jaws which makes them an omnivorous species.

Conservation Status: Critically endangered in western Atlantic oceans and threatened in other parts of the world.

Geographical Range: They are distributed among tropical and temperate waters around the world.

Eating Habits: Green turtles have finely serrated jaws that are well suited for a vegetarian diet that includes sea grasses and algae. Since these food sources are not sufficient when consumed individually, a green sea turtle needs to feed on both in large amounts every day. Its head is smaller than other species because it does not have to expand the jaws while eating.

Geographical Range: It dwells in tropical and subtropical ocean waters around the world and in the Mediterranean sea.

Eating Habits: They can comfortably feed on prey animals with hard shell covering on their bodies; common examples being crabs, shrimp, mollusks, jellyfish, and vegetation. While loggerhead turtles are known for diving deep down the bottom of the sea to find their food, they can even feed in shallow waters in the coast. The jaws of loggerhead turtles are built for grinding and crushing.

Conservation Status: Listed as endangered in the U.S.

Geographical Range: They are found throughout the Atlantic and Indo-Pacific regions.

Eating Habits: Its diet comprises sponges, shrimp, tunicates and squids. A hawksbill is very selective while looking for food unless, there is unavailability of the preferred food. Its mouth is designed to grab foods from crevices in coral reefs. It has an exceptionally narrow head that enables it to grab the food from these small spaces. It spends 95% time of a day in eating.

Geographical Range: It inhabits the waters of the northern, northwestern and northeastern coast of Australia, and the Gulf of Papua, New Guinea.

Eating Habits: The feeding habits of flatbacks are yet to be determined by scientific community; and so far they have been observed as opportunistic feeders. They eat sea cucumbers, seaweed, cuttlefish, squid, mollusks and soft corals. Their habit of ingesting large amounts of sea grass proves beneficial for creating a healthier ecosystem for other living organisms under water.

Conservation Status: Data deficient i.e., there is a lack of adequate information about its extinction. 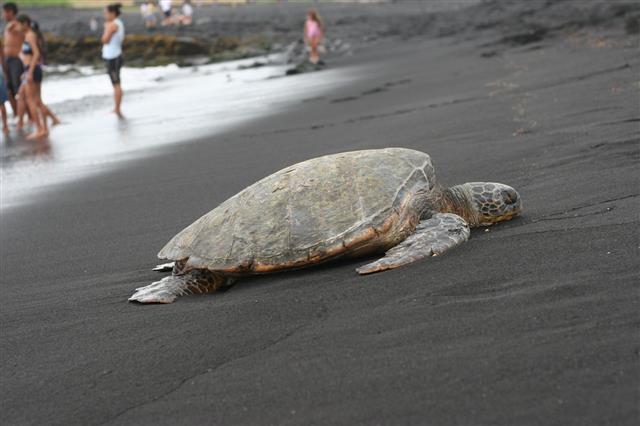 It is believed that female sea turtle cries on her way back to sea leaving her eggs buried in the sand. However, scientific research claims that there are tears in her eyes but they are a mere outlet for getting rid of the salt water that is taken in. These tears also protect her eyes from harmful sand particles. TheChinese believed that the patterns on turtle shell  were the charting of the path that a soul travels after death. On similar lines of Chinese belief, native American story  of creation tells that America emerged out of the mud on the shell of an immense sea turtle. 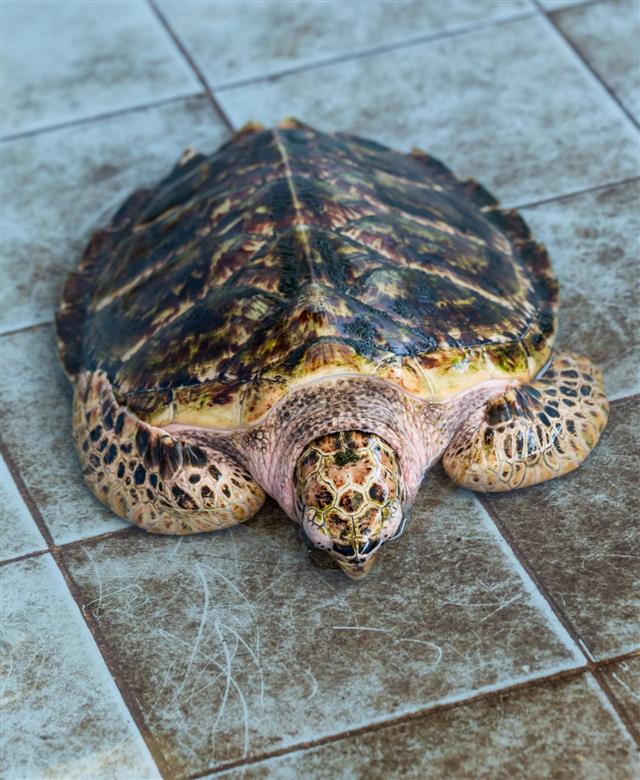 One of the ten avatars of vishnu, in Hindu mythology, turtle is said to carry the entire world on its back. Four elephants holding the earth on their backs are in turn standing on the back of a turtle. It is also respected for itswisdom and protective strength.

Some Light On Moonlight…

Hatchlings of sea turtles need moon and star light to find their way to the ocean. For this reason, during the nesting season, beach-side residents are supposed to put out their lights. It is the law made by the U.S. government because man-made light dims the moon light resulting in disorientation of the hatchlings. Consequently, the hatchlings struggle to reach a safe point in the ocean and many times keep wandering on the land. Furthermore, they are either picked up by predatory animals or die of heat in the sun. 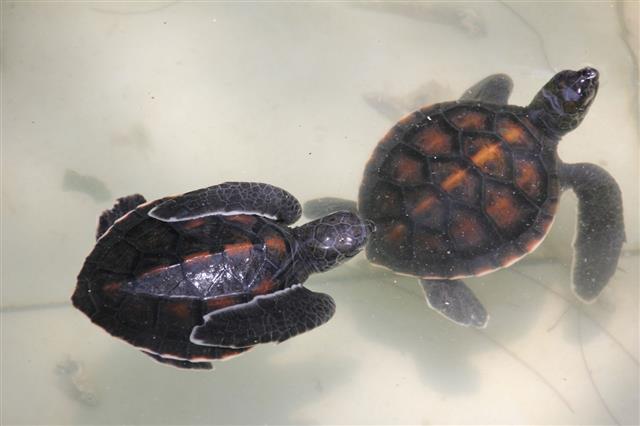 Sea turtles have existed for over 100 million years, yet it is only in the recent past that they are struggling for their survival; partly because we humans have just added to their woes by fueling global warming and polluting the oceans. In fact, global warming has severely disrupted the natural birth process of sea turtles. 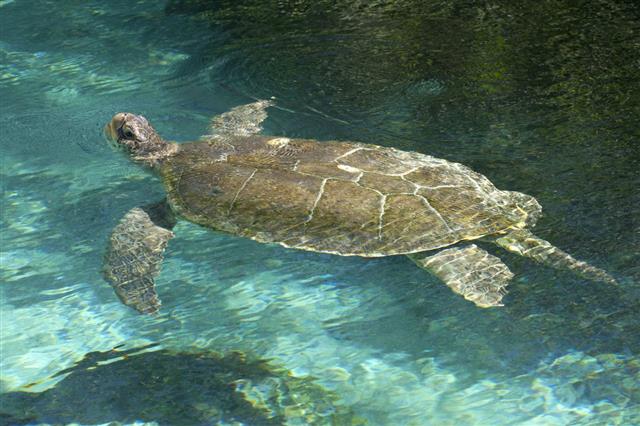 Hatchlings in the developing stage do not have sex hormones and hence their gender is determined by the temperature of the sand. While warmer temperatures favor birth of female hatchlings, colder temperatures are suitable for the birth of male hatchlings. Because of an exceptional rise in the temperature birth rate of female turtles is naturally increasing than that of male turtles, creating an imbalance in the ecosystem. It is only in changing our ways that we can save one of the oldest existing species. 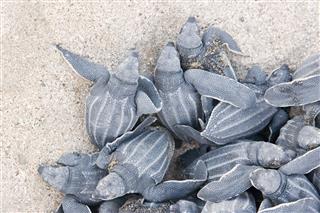 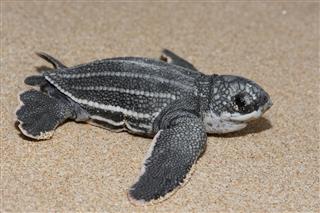