All You Wanted to Know About the Zebra Swallowtail Butterfly

These butterflies have stripes like zebras, and tailed wings, like swallows. Here are some interesting facts about zebra swallowtail butterflies that belong to the family Papilionidae, which includes some of the largest butterflies in the world.

You are here: Home / Uncategorized / All You Wanted to Know About the Zebra Swallowtail Butterfly 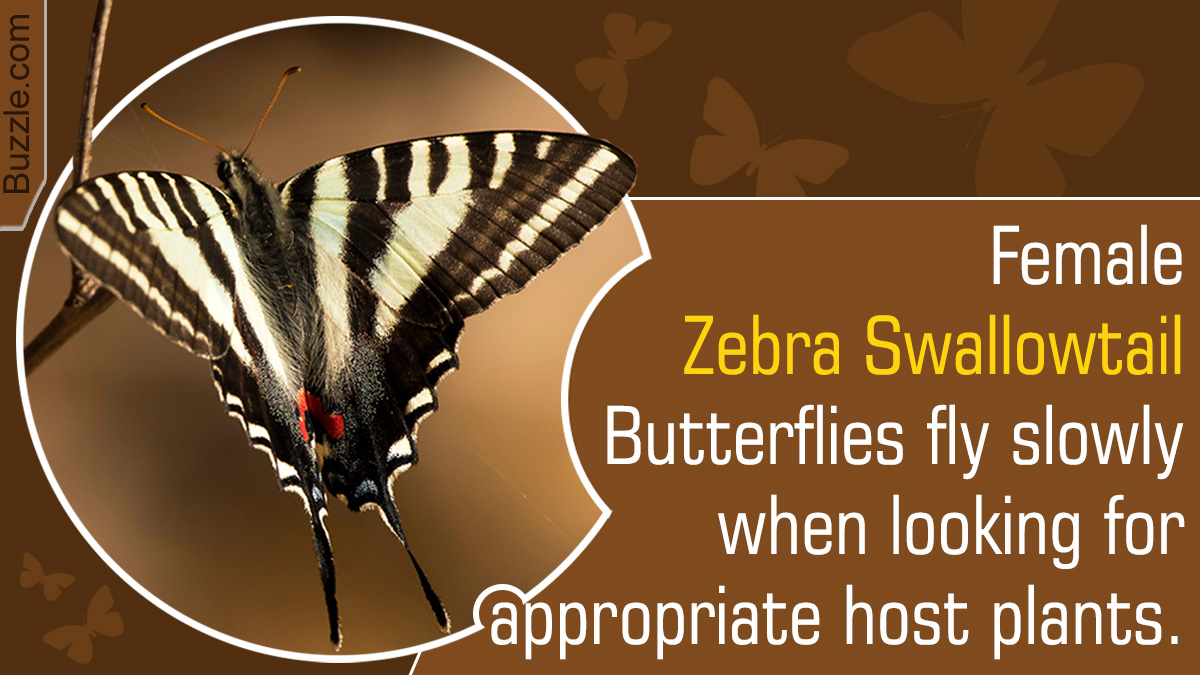 These butterflies have stripes like zebras, and tailed wings, like swallows. Here are some interesting facts about zebra swallowtail butterflies that belong to the family Papilionidae, which includes some of the largest butterflies in the world. 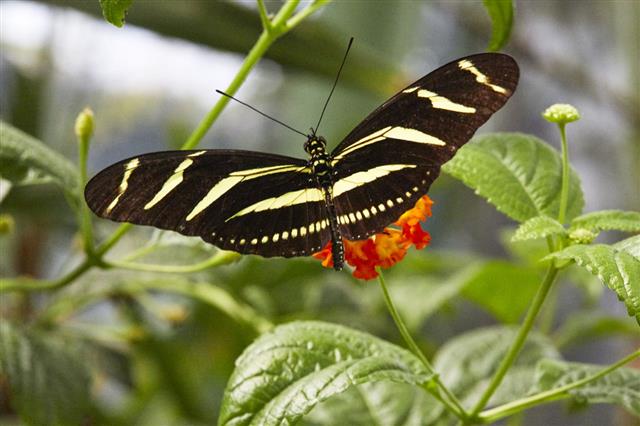 As the name rightly suggests, the characteristic feature of a zebra swallowtail butterfly is the black and white stripes on its wings. This butterfly has tail-like extensions on its hind wings, and hence the name, swallowtail. Their hind wings may also have two blue markings at the base, and a red spot close to the body. The margins of the hind wings are scalloped.

The wingspan of these butterflies range between 7 to 11 centimeters. There are two seasonal forms of zebra swallowtail butterflies – spring forms and summer forms (adult butterflies emerging from the pupa stage during spring or summer). It has been observed that the spring forms are smaller and whiter when compared to the summer forms. In spring forms, the tails are small and black, with white tips, whereas summer forms have longer tails with a prominent white color. The zebra swallowtail butterfly (Protographium marcellus) is mainly found in the southeast parts of the United States and certain regions of Canada. It is the official state butterfly of Tennessee.

Male zebra swallowtail butterflies fly around the host plants (pawpaws) in search of females. After mating, the female butterflies lay spherical eggs on the leaves of the pawpaw trees. The color of the eggs changes from light green to golden brown, after three to four days. The larvae are black in color on hatching, but as they grow, stripes develop. There are two types of stripe patterns in older larvae, which are hairless. The most common form is green with white and yellow horizontal stripes. They have a band of three colors (yellow, black and bluish-white) between the thorax and the abdomen. The second type, which is rarely seen, is black with white and orange stripes.

These caterpillars live and pupate underneath the leaves of pawpaw trees. The pupa is usually green or brown in color, and is small and compact as compared to that of the other swallowtails. They hang with their heads upwards, binding to a stem or leaf with the tail. They also have a silk ring around their thorax. A period of around one month is required for the eggs to develop into zebra swallowtail butterflies. Some pupae spend the entire winter in hibernation, before emerging as butterflies. Once they emerge, there is no growth stage for these butterflies and they will start reproducing. Such a butterfly, after emergence, may live up to six months in their natural habitat.

The habitat of zebra swallowtails includes those regions where pawpaw trees grow abundantly. In short, these butterflies are seen in open woodlands near swamps and rivers, grasslands, savannas, and southern pine woods.

Flower Nectar: As mentioned above, adult butterflies do not feed on pawpaw leaves. Unlike caterpillars, butterflies lack jaws. The latter sip liquid nectar from flowers, using a straw-like organ called proboscis. Zebra swallowtail butterflies feed on the nectar and pollen of flowers like blueberry, blackberry, lilac, redbud, verbena, and common milkweed. Sometimes they collect pollen from flowers using the proboscis and digest it to absorb proteins. The extra energy and nutrition from these proteins help them to mate and lay eggs for longer periods. Their mating season can extend up to six months. The proboscis is not so long in zebra swallowtail butterflies and so, they are mostly found to feed on the nectar of flowers that are flatter.

Puddling: The males may also indulge in puddling, wherein they assemble together on moist ground to gather nutrients, like salt and amino acids. These nutrients are transferred to the body of the female butterflies during mating. It is believed that the nutrients help to maximize the survival rate of eggs. While some species derive the nutrients from soil, others opt for sources like urine, dung, dead animal matter, tear, and even blood.

Pawpaw Toxins: Their affinity towards the pawpaw leaves has another interesting reason. The leaves of pawpaw trees have certain toxic chemicals called acetogenins. While most of the insects avoid pawpaw leaves as food, the larvae of zebra swallowtails feed exclusively on them. The chemicals in the leaves are retained in the body of the caterpillars, throughout their life. Even the adult butterflies have some amount of acetogenins in their body, though they do not feed on pawpaw leaves during the butterfly stage. Presence of these toxic chemicals in their body may discourage predators like insects and birds.

Osmeterium: The distinctive feature of swallowtail butterflies – the forked gland called osmeterium, located behind the head of the caterpillar, is seen in this species too. This structure, which is usually hidden, can be stuck out to release a smelly secretion to deter predators. If the caterpillar feels threatened, the osmeterium is filled with blood, so that it emerges out to emit the secretion. The foul-smelling secretion may deter small predators, like ants and spiders.

Usually, the caterpillars never leave the pawpaw trees till they transform to adult butterflies. In some cases, the caterpillar may leave the tree and pupate in leaf litter on the ground. Such behavior is mostly found as a defense mechanism, to avoid predators. In short, zebra swallowtails have some striking features that make them distinct from others. They are also known as pawpaw butterflies and kite swallowtails.