The liger is touted as being the world's largest cat. Read on to find out how big it is, how much it weighs, and other such interesting facts about this amazing feline cross specie.

You are here: Home / Uncategorized / Facts About Ligers

The liger is touted as being the world’s largest cat. Read on to find out how big it is, how much it weighs, and other such interesting facts about this amazing feline cross specie. 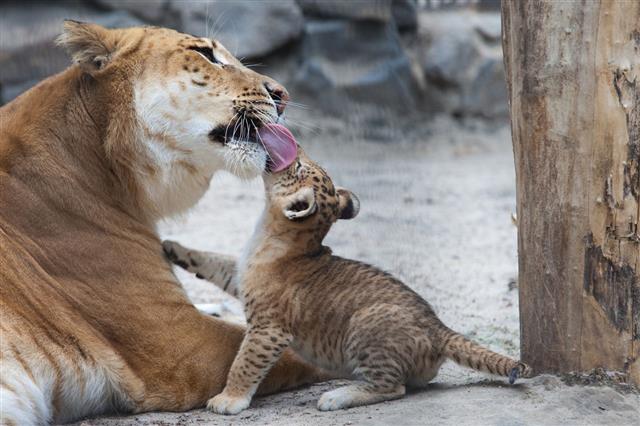 Ligers are born when a male lion mates with a female tiger. This hybrid animal is recognized by the Guinness Book of World Records as the largest living cat on Earth. Ligers are presently known to exist only in captivity, as the natural habitats of the parents do not overlap.

Lions and tigers belong to the same genus, but are different species. As such, their offspring inherits physical characteristics of both the parents. Even the behavior of ligers is a mixture of that of lions and tigers.

A liger is different from a tigon, which is a rare hybrid of a male tiger and a lioness. It is also much bigger in comparison. Unlike tigons, ligers have a greater chance of living past birth. However, there is a possibility that ligers may inherit health issues of both the species. The following are some important facts about ligers.

Ligers tend to resemble the lion more closely because of the dominant gene. As such, a liger looks like a giant lion, which has muted stripes similar to a tiger on a brownish orange coat characteristic of the lions.

A liger is larger in size than both its parents. The head of a liger looks more like a lion’s head, and the tail is more like that of lion. But, ligers have no trace of a mane. The face of a liger may have rosettes, which are rose like markings on the fur. These marking can be black, dark brown or sandy in color. The body color may be sandy, golden or tawny. Similar to the tigers, the underparts of ligers are pale.

As mentioned above, ligers tend to grow a lot larger than both their parents. Typically males attain a total length of 3m to 3.5m and meaning that they are larger than even the large Siberian tiger. They are also known to weigh in excess of 1,000 lb. This makes ligers, the biggest living cat species in the world. Females too attain a great size (3.05 m on average) and an average body mass of 705 lb.

Ligers inherit behavioral characteristics of lions as well as those of tigers. They can make the sounds of both the lions and the tigers. Ligers enjoy swimming, which is a tiger-like behavior. They’re also social cats, which is a strictly lion-like trait.

When they are cubs ligers, similar to lion cubs, are extremely playful and sociable. They are friendly and allow the admission of others into their territories.

Lion males, on reaching maturity become highly ferocious and territorial. The same is true for tiger males who in addition to being solitary cats are also territorial. Ligers on the other hand continue to possess mild personalities as they age. They retain their playfulness and more willingly accept others into their territories. They are also much more responsive to their trainers.

For a long time both ligers and tigons animal species were thought to be sterile, however this doesn’t apply to both the sexes of the mixed species.

According to Haldane’s rule, in hybrid animals, whose sex is determined by sex chromosomes, if one sex is absent, rare or sterile, it is the one with two chromosomes (eg: X and Y). As such male ligers are sterile, however, their female counterparts are fertile.

In the year 1943 a fifteen year old hybrid between a lion and an Island tiger, was successfully mated with a lion at the Munich Hellabrunn Zoo. The cub, a female originally of delicate health, was raised to adulthood.

The Russian Novosibirsk Zoo on September 2012, witnessed the birth of a ‘liliger’ named Kiara – an offspring of a lion father and a liger mother.

Now, that you have read the above facts on ligers, are you wondering if a white liger or snow white liger exists? Such hybrid animal is not reported yet, but in theory there is a possibility.

The exact life span of ligers hasn’t been determined. Most of them die at birth or later due to genetic defects and greater vulnerability to diseases. The following are a few statistics:

A female liger named Shasta, was born at Hogle Zoo in Salt Lake City, and died at the age of 24.

Another was a male liger called Nook, who lived in Valley of the Kings animal sanctuary in Wisconsin, and died at the age of 21.

Hobbs, a male liger, was 15 years of age, when he perished due to liver failure, at the Sierra Safari Zoo in Reno, Nevada.